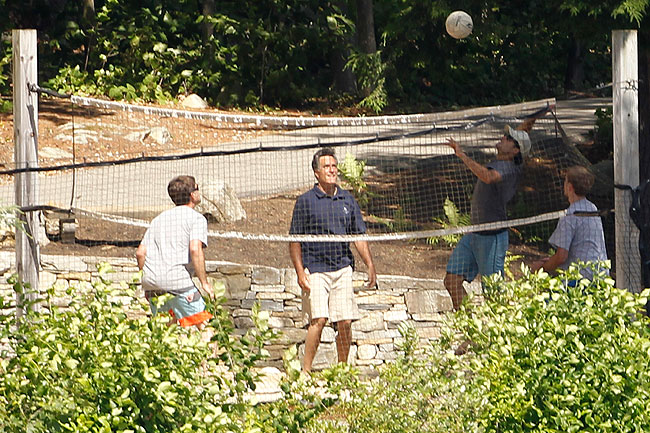 JohnHart takes a look at past and present real estate of both presidential candidates of Barack Obama and Mitt Romney. While Mitt Romney owns more than a handful of properties on both the East and West Coasts of United States, when he’s not running for leader of the free world, he lives at his beachfront home in La Jolla, California.  In 2008 Mitt and wife bought the property for $12,000,000.  Though, apparently living on the prestigious California coast with 61 feet of beach frontage wasn’t enough, he filed an application with the city to bulldoze the house to replace it with an 11,000 square feet two-story home with its own $50,000 car elevator.  After paying CASH for the property, the Romneys in 2009 decided that their home lost 45% of its value in the first half of a year that they owned it and to have its worth reduced to $6.8 million so they could save on paying property taxes.  After the hiring of an attorney/lobbyist that helped the Romneys find the home and after several filings regarding the worth of the property, they ended up saving about $109,000 in property taxes over four years. Belmont, Massachusetts is home to Romney’s 2 bedroom, 2,100 square foot, gated community townhouse that was purchased in 2010 for $895,000.  The home that they claimed previously as their legal Massachusetts address?  Their son’s basement. The Romneys also own another waterfront property, but this time it’s 11 acres on the shore of Lake Winnipesaukee in Wolfeboro, New Hampshire.  800 feet of shoreline to be exact on Mass’s largest lake.  In 1997, the Romneys purchased the 5,400 square foot house (along with additional guest house) for $3,000,000.  It’s current estimated value is $10,000,000.  It features 6 bedrooms, 2,700 square foot boat house (what,  no boat elevator?), beach volleyball court and 2,600 square foot guest house.

Check out some of the past primary hopefuls homes.

Before moving into the house that, most will never be able to step foot into, Barack Obama lived in Hawaii but owns just one home in Chicago, Illinois. The purchase came under fire for possibly being a shady deal with Tony Rezko being involved.  From Wikipedia:

In 2005 Obama purchased a new home in the Kenwood District of Chicago for $1.65 million (which was $300,000 below the asking price but represented the highest offer on the property) on the same day that Rezko’s wife, Rita Rezko, purchased the adjoining empty lot from the same sellers for the full asking price. Obama acknowledged bringing his interest in the property to Rezko’s attention, but denied any coordination of offers. According to Obama, while the properties had originally been a single property, the previous owners decided to sell the land as two separate lots, but made it a condition of the sales that they be closed on the same date. Obama also stated that the properties had been on the market for months, that his offer was the best of two bids, and that Ms. Rezko’s bid was matched by another offer, also of $625,000, so that she could not have purchased the property for less.

After it had been reported in 2006 that Rezko was under federal investigation for influence-peddling, Obama purchased a 10 foot (3.0 m) wide strip of Ms. Rezko’s property for $104,500, $60,000 above the assessed value. According to Chicago Sun-Times columnist, Mark Brown, “Rezko definitely did Obama a favor by selling him the 10-foot strip of land, making his own parcel less attractive for development.” Obama acknowledges that the exchange may have created the appearance of impropriety, and stated “I consider this a mistake on my part and I regret it.”