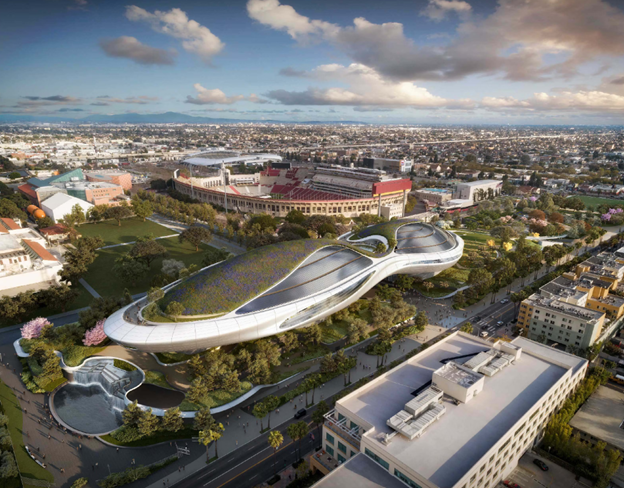 It seems like the opening of the Lucas Museum of Narrative Art is still far, far away. If you couldn’t believe that the $1-billion museum was coming to Los Angeles before, its two-year delay should make it real. After all, this city is known for its delayed plans. The massive museum, currently in the midst of being constructed in Exposition Park, will now open its doors in 2025… assuming there are no future delays. And in LA, that’s quite the assumption. Yet, if all goes according to plan, the city will have a new facility to add to its already impressive museum roster in two short years.

Why is the Lucas Museum Delayed Again?

While there are a variety of factors contributing to the construction delay, supply chain issues make up the primary area of concern. This is a direct result of the pandemic. More specifically, the supply chain issues involve challenges in securing certain building materials, much of this owing to manufacturer hurdles.

One of the most difficult materials for the Lucas Museum to secure has been a substance known as Geofoam. It’s a light, moldable substance frequently used in theme parks and movie sets to emulate topography, such as rock formations. But the museum has also faced challenges in obtaining European parts including specially designed elevator pieces and light fixtures.

It’s not the first time the pandemic has forced the Lucas Museum to announce delays.  In April 2021, the opening moved from its original projected 2022 date to 2023. At the time, they cited delays due to increased safety protocols rising from the global pandemic.

The Next Two Years for the Lucas Museum

The additional two years that have been tacked onto the project won’t just accommodate additional construction. Experts must also quality check the building to ensure it can accommodate the diversity of rare and, in some cases, priceless art that will be on display. This involves adequate atmospheric controls.

However, the Lucas Museum’s Director and CEO Sandra Jackson-Dumont has assured the press that the delay won’t impact the estimated budget of the massive project. It likely helps that the primary source of funding has been legendary director George Lucas himself as well as chairwoman of Starbucks (and Lucas’s wife) Mellody Hobson.

When the Lucas Museum of Narrative Art is finally completed, it will tower at five stories over an 11-acre campus including a diversity of planted trees sprawling before the 300,000-sqft structure. A quick drive by the L.A. Memorial Coliseum will reveal the Lucas Museum in its current state of construction. It already looks massive.

The enormous museum takes over a space that was once reserved for parking in the Exposition Park area. Ma Yansong of MAD Architects designed the otherworldly looking main structure. Mia Lehrer, founder of Studio-MLA, envisioned its exotic gardens.

Along with its numerous galleries, the museum will also offer two movie theaters with ultramodern equipment, community spaces, retail, and dining.

What Kind of Narrative Art to Expect

The process is already well underway for collecting the impressive multitude of artwork that will bedeck the galleries of the Lucas Museum. The collection will include over 100,000 examples that span mediums and time periods. However, all will share the commonality of narrative art (or art that tells a story).

Construction History of the Museum

Yet, another major U.S. city was the first choice to host the Lucas Museum. Originally, planners had their sights set on Chicago. However, the city rejected the museum in 2016 following a heated campaign by an organization called Friends of the Parks.

The construction crew broke ground in Los Angeles in March of 2018. Two years later, the crew set the final structural beam; a process referred to in the construction business as “topping out.” Since then, experts have installed the majority of the electrical, mechanical, and plumbing systems.

As part of the planned garden, 200 trees have been planted. As it edges closer to opening its doors, the museum has already employed 4,200 workers.

For now, it’s clear that the minds behind the Lucas Museum are content to take their time to get everything just right. We hope those Geofoam rock formations are worth the wait!