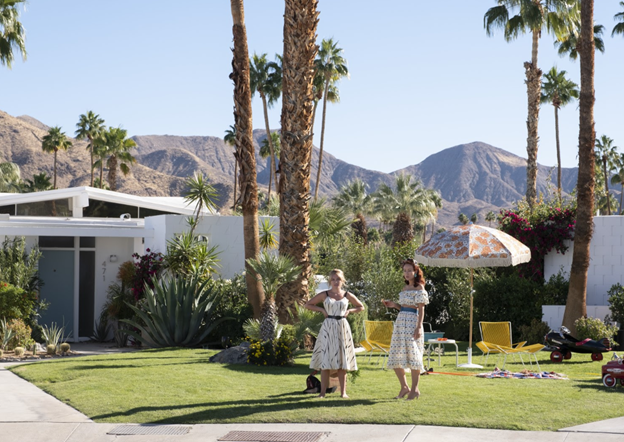 If you keep up with the film industry, you might feel like you’re in purgatory lately. That’s because behind-the-scenes gossip of Olivia Wilde’s latest directorial offering Don’t Worry Darling has dominated the headlines for months. With the film finally hitting theaters last weekend, you’d think the stories would die down. But there’s one more shock left for a weary audience. Don’t Worry Darling brought in a $19 million opening ($2 million over the projected amount according to The Hollywood Reporter). And even if your ears reject the drama, your eyes won’t be able to choke down the scenery fast enough. This owes much to its Palm Springs location; a character in its own right.

The Importance of the Palm Springs Location

Director Olivia Wilde, production designer Katie Byron, and cinematographer Matthew Libatique worked together to bring the atmosphere to life. When they were looking for a suburban sanctuary for their thriller, Palm Springs was an obvious (if not easy) option. With its charming mid-century homes, quaint palm-lined streets, and omnipresent sunshine, the enclave contrasts a decidedly dark story.

Wilde envisioned Victory, the eerily utopian community project central to Don’t Worry Darling, as inward-facing, self-contained, and, therefore, isolated. The desert mountain vistas seeming to embrace the Palm Springs location made it the perfect fit for her concept. The idea of classic 1950s suburban Americana concealing a disturbing secret isn’t a new idea in cinema. But as pretty much every frame of Don’t Worry Darling illustrates, few auteurs have done it so fashionably. And Palm Springs was instrumental in serving up this mid-century chic.

The real life neighborhood of Canyon View Estates earned a prominent feature in the film with its gorgeous mid-century single-story tract houses. Looking like a suburban fantasy, this South Palm Springs location serves as the fictional Victory community where the characters reside. This includes the main characters of Alice and Jack. However, it’s important to recognize that Canyon View Estates only served for front exterior shots. To create the interior of Alice’s and Jack’s home as well as their backyard, the film crew employed a stage set.

Canyon View Estates finished construction in 1966 and its nearly 200 condominiums still retain that era’s swinging aesthetics. All of the hallmarks are there: authentic rock edifices, sparkling swimming pools, tranquil cul-de-sacs, and desert-defying verdant lawns. Alice’s and Jack’s home is a genuine private residence located at the center of Canyon View Estates on Azul Circle.

A plethora of additional buildings come together to create the too-perfect utopia of the Victory community. While not every scene incorporated a Palm Springs location, it’s obvious that Wilde and her crew favored the area as the real world analog to Victory’s seemingly placid paradise.

The Victory community (at least on the surface) often illustrates a theme that Aarons tried to capture in his photos of “attractive people doing attractive things in attractive places.” And when they decide to do those attractive things together, it’s often poolside. To create Victory’s community pool and clubhouse, Wilde and her team turned to La Quinta Resort & Club. While not a Palm Springs location per se, the resort captures the scenic charm of the Coachella Valley that Palm Springs shares.

Our first Palm Springs location to be designed by Albert Frey, the Palms Springs Visitors Center was originally a gas station. It makes more of a blink-and-you’ll-miss-it cameo in the movie than a featured location. Yet its instantly recognizable arrow shape will stand out to anyone familiar with the Palm Springs area.

In another cameo more than an established scene, the Palm Springs City Hall graces the movie with its boxy mid-century charm. This was another Frey creation. He designed an otherworldly look with a perfect circle through the roof punctuated by swaying palms that makes it easily identifiable.

The Stuart at Sierra Madre Villa

Though Wilde and her team tended to favor a Palm Springs location in most circumstances, they had to turn elsewhere for the movie’s scene of the housewives shopping. To capture that ultra-clean mid-century aesthetic, they locked onto the Stuart at Sierra Madre Villa. This luxury apartment complex once stood as the headquarters of Stuart Pharmaceuticals on the outskirts of Pasadena. Its architecture has been remarkably preserved over the decades so that it believably fits in with the aesthetic of the Palm Springs scenes for a uniform look.

One of the most iconic structures in Don’t Worry Darling stands quite a distance from any Palm Springs location. It’s called the Volcano House (not to be confused with the former Bob Hope house in Palm Springs). And, in reality, it’s built atop a volcano! This historic Newberry Springs home was at one time owned by California’s late beloved television presenter Huell Howser. You won’t have to worry about missing this one as it serves as Victory’s eerie (and off-limits) headquarters.

In Don’t Worry Darling, the residents of the Victory community are strongly requested to not leave the confines of the desert oasis. Just looking at some of these locations, it’s not such a tall order. Of course, the real Palm Springs isn’t masking some nightmare (unless you count the reservation waitlist for Sandfish during peak season). Don’t Worry Darling is in theaters now. But if you want to immerse yourself in the real Palm Springs, reach out to one of our agents serving the Greater Palm Springs area!