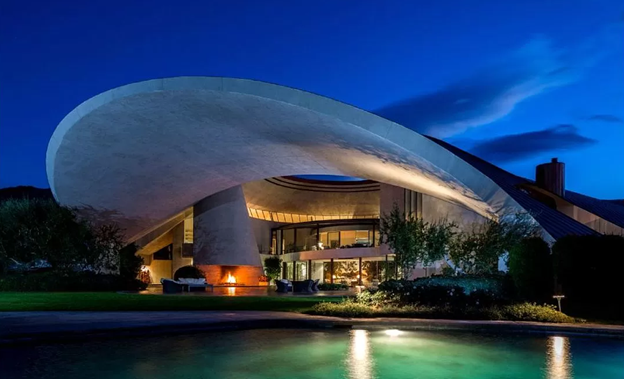 In our “Home Spotlight” series, we’ve taken you on a tour of a potential Los Angeles murder mansion. We’ve taken you over 20 feet beneath the scorched Las Vegas ground to a subterranean wonderland. And now we’re taking you… golfing. Okay, it may seem anti-climactic, but did we mention that the house we’re talking about today finds inspiration in a volcano? Okay, now that you’re back on board, we’re heading to the desert oasis of Palm Springs to a home frequented by one of America’s most beloved comedians of all time. It was a home nearly a decade in the making when it was finally unveiled in 1980. Today, it looms as one of the most instantly recognizable examples of modernist architecture in the world. Ladies and gentlemen, welcome to the Bob Hope House.

Palm Springs unofficially adopted modernism as its style of choice sometime in the idle of the 20th century. We briefly mentioned in a recent blog that the Palm Springs Art Museum has an entire collection devoted to mid-century modernism. The aesthetic is clearly represented in a number of notable buildings around town. Palm Springs even hosts its own Modernism Week in celebration of the design aesthetic. So it comes as no surprise that when one of America’s most recognized celebrity couples began formulating their third Palm Springs home, they wanted to employ the chic design style. Yes, you read that right… third home. That’s because comedy titan Bob Hope’s equally titanic house was actually his third. Not third total. Third in the city of Palm Springs.

Now, Bob Hope and his wife Dolores adored Palm Springs. Hope, an avid golfer, likely felt the city fit him like a Titleist glove. But the fact that the massive complex we’re about to examine was simply one of several vacation homes in the Hopes’ possession gives you an idea of the immense scope of their wealth. When they began planning their next massive Palm Springs home with a modernist aesthetic, they could easily afford the best.

And Palm Springs’ best was John Lautner, a noted American architect who had studied closely under Frank Lloyd Wright. Much of Palm Springs’ most iconic modernist architecture owes a debt to Lautner’s vision. When he was tasked with creating an enormous compound for the Hopes in the gated community of Southridge, he allowed his creativity to flow like unbridled lava. Lautner’s grand vision for this home imagined a volcano cutting through the blue desert sky with a yawning hole at its center emulating the crater. This cavity served as a massive looming skylight allowing the golden California sunshine to cascade down upon a central patio.

A volcano may seem strange inspiration for a comedian, but the theme likely had less to do with the Hopes and more to do with Lautner’s mentor. Wright promoted the philosophy of “organic architecture” which strove to marry nature with design. Yet, Lautner began work on the famed Bob Hope House at a time when he was trying to distance himself from Wright’s recognizable style. After all, when the Hopes approached Lautner about designing their new home, it had been almost 40 years since he’d apprenticed for the master architect.

Yet, old habits die hard. Signature features of Wright’s design style popped up all over the Bob Hope house. Aside from the natural inspiration, Lautner employed curving contours, wide glazed panels, and steps leading to exterior areas; all hallmarks of Wright’s compositions. There’s even a striking parallel to Wright’s famed Fallingwater property in the Bob Hope house. This comes in the form of a well-sized boulder protruding into the central terrace area.

When completed, the Bob Hope home measured over 23,000 square feet, punctuating a vast 6.2-acre stretch of land. Its massive dome, easily the property’s most distinguishing feature, is viewable from afar in the hills of Palm Springs to this day. Those who don’t know the volcanic inspiration behind the dome are wont to refer to it as a mushroom or flying saucer. Measuring 40-feet at its peak, the looming copper shell also boasts an impressive 180-foot diameter. The “crater” at its pinnacle measures 60-feet in diameter.

Originally, the dome was a bright white color. However, a natural earth-colored rock was applied to the dome. This created a seamless blend with the San Jacinto Mountains. Like a massive clam shell, the structure’s dome draws downward to meet the ground. This results in three archways overlooking pastoral scenes of the San Jacinto Mountains and Coachella Valley. The dome was finally completed in 1979, nearly a decade after the Bob Hope House was designed. However, there was a setback of significance that we’ll discuss later.

Other Features of the Bob Hope House

With its 10 bedrooms, 10 bathrooms, and three half bathrooms, the Bob Hope House could accommodate more than the couple. This was obviously by design. Many acquainted with the home compared it more to a celebrity resort than an actual place of residence. Its odd structure and gated grounds hid a plethora of wonders. A glass-walled dining room provided an ideal setting for serving meals to the most distinguished of guests. Rumor has it that helicopters were employed to fly in huge panels of glass for the structure’s windows.

On chilly desert nights, guests were kept toasty via a fireplace culminating into a conical chimney. The Hopes were also known to cover the “crater” with plastic tenting when entertaining guests during colder months. Indoor and outdoor swimming pools met their visitors’ every whim. The Hopes could also unwind with their own private tennis court. And, as a golf enthusiast, Bob Hope naturally devoted a decent fraction of the six-acre property to his personal putting greens.

The popularity of modernist architecture in Palm Springs made it a chic choice for celebrities with the money to afford it. In this sense, it’s not surprising that the Hopes sought the vision of Lautner. It’s said that they were great admirers of his work on the arguably more well known Elrod House. However, Bob Hope was said to remark upon seeing a model of the modernist home, “Well, at least when they come down from Mars, they’ll know where to go.” Hope was a comedian, so quips like this were admittedly par for the course.

But it lends credence to a bizarre rumor that Lautner’s involvement in the Bob Hope House was at the behest of the Chrysler company. The rumor proposes that the car company funded the massive residence as a spot for the Hopes to comfortably host lavish dinners in conjunction with the Bob Hope Classic Golf Tournament. The Hopes did host up to 300 guests at a time in the central terrace each January to celebrate the tournament. Dolores would even make the antipasto salad herself. Perhaps most notably, Chrysler was a major annual sponsor of the tournament.

Was the Bob Hope House less a personal passion of the Hopes and more a corporate sponsored symbol of decadence masquerading as a residence? It was the Hopes’ third home in Palm Springs alone. Reports confirm that the Hopes never used the massive abode as a primary residence. Bob Hope compared the Elrod House to a Martian craft only to have his own home later compared to a flying saucer. And, as we’ll soon see, Dolores Hope and Lautner didn’t exactly share the same vision. But we’d still consider this rumor more of an interesting possibility than a probability.

Build a Volcano, Expect Some Smoke

As we mentioned earlier, the roof of the Bob Hope House took nearly a decade to complete. The delay was largely the result of a stray spark from a welder’s torch during construction in 1973. That wayward spark built into an all-consuming blaze. Years of work were burnt to the ground, costing somewhere to the tune of $500,000 in damages. At that point, the dome had been constructed of a steel frame filled in with wood. Insurance disputes stalled construction of the Bob Hope House another four years. Who knows if the home would have ever been completed had residents of the high scale Southridge community not complained. Yet, their annoyance at the neighboring hulking, charred framework spurred the Hopes into action. Since the original building permits were still active, construction resumed with the Hopes’ blessing.

It’s worth mentioning that Arthur Elrod, the chief interior designer working on the Bob Hope House, passed away in the early stages of the home’s construction. It was Elrod’s famed home that had inspired the Hopes to seek Lautner’s services. Without the legendary designer’s guiding vision, Dolores Hope became much more involved in the interior design aspects of the home. She began working closely with a Beverly Hills-based interior designer with ideas that directly contradicted several of the late Elrod’s original plans. Feeling that the Hopes’ ideas had fallen out of sync with his own, Lautner bowed out from the project.

Lautner had fully supported Elrod’s modernist approach to interior design. It would have made  effective use of natural lighting within the confines of the Bob Hope House. But Dolores Hope found inspiration in the baby pink roof of the Sunnylands estate, a popular celebrity spot owned by Walter and Leonore Annenberg. Eventually, her additions to the original design included extending the balcony to meet the dining room and corridors leading from the bedrooms to the entry that didn’t require cutting through the terrace. Under her direction, plants were brought in to spruce up the spa area. She also commissioned contemporary painter Garth Benton to create murals behind the primary floor’s bar and the spa area.

A Return to Lautner’s and Elrod’s Shared Vision

Bob Hope passed away in 2003 with Dolores retaining the home until her own passing a decade later. The Bob Hope House was quickly put on the market for a staggering $50 million. The listing agent justified the price by pointing out that a rebuild of the colossal home would be nearly impossible in modern times and come at an astronomical cost. Despite its impressive size, historic background, and masterful design, the residence floundered on the market through price reductions. It wasn’t until 2016 that the house finally sold for $13 million to investor and venture capitalist Ron Burkle. An obvious fan of modernist architecture, Burkle also once owned the aforementioned Elrod House designed by Lautner.

Keen to return the Bob Hope House to Lautner’s and Elrod’s original concept, he hired the home’s former site architect Helena Arghuete to oversee the remodeling. Much of the structure’s interior was torn out and replaced with natural materials in keeping with the “organic architecture” ethos. Woodworkers were contracted to create a dozen new doors based on Lautner’s original designs. Finally, rich African mahogany was used to redefine the interior walls.

It’s Lonely at the Top… of the Volcano

Today, the Bob Hope House still stands proud yet distant behind the secure gates of its Southridge community. It’s hard not to view it as a colossal artifact of ultra-wealth. Here we find a looming, mighty volcano whose pantomime fury will remain forever dormant. And more literally, we find a sprawling home offering every comfort, yet still never being cherished as a primary residence. Perhaps the Bob Hope House transcends our ideas of home and even shelter into something different altogether.

Did the Hopes ever feel at home in its cavernous terrace? Or did they feel elevated to the scrutinizing eye of some cosmic deity when they stared up through that crater into the Palm Springs night? Even Burkle, busy trying to sell another former Hope property in Toluca Lake at $29 million, has never called the Bob Hope House his primary home. Perhaps the fate of the celebrity home mirrors that of celebrity itself: recognized by all, but known by few… if any.