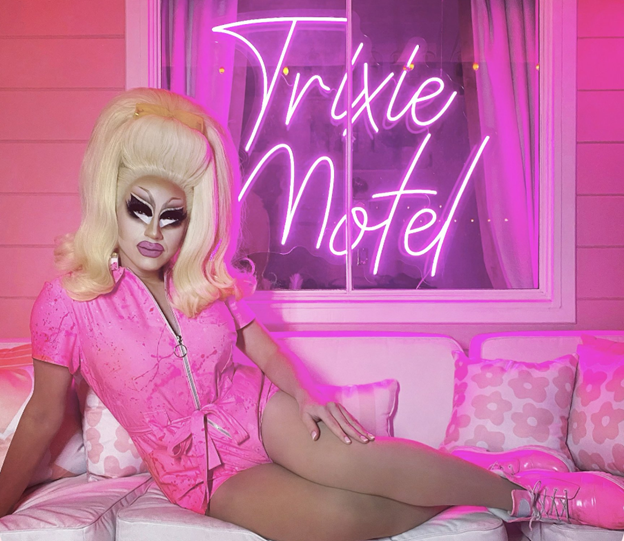 If you think that Palm Springs could do with a little more… strike that… A LOT more pink, you’re in luck. The prodigiously pink Trixie Motel opened its doors to guests on Thursday, September 1st. For some, it’s yet another boutique hotel to consider for the next weekend getaway. But to others, it’s an unabashed oasis of killer kitsch in an enclave that needed a swift kick with a velvet-swathed go-go boot.

Finding a Sparkling Dream in a Desert Oasis

The Trixie Motel owes a lot more than its name to Ru Paul’s Drag Race’s sparkling season seven centurion Trixie Mattel. Most of the world is familiar with Mattel. But for the uninitiated, she later went on to become the champion of Ru Paul’s Drag Race All Stars with her unmistakable neo-mod looks, hungry black hole eyes, and rosy cheeks like a pair of Pink Lady apples.

The Trixie Motel is a collaboration between Mattel and her partner, David Silver. Their official website also splits credit with Brian Firkus, the man behind the queen. While Firkus was vacationing with Silver, the two discussed a fantasy of a Trixie-themed boutique hotel experience. It was just a running (or gracefully strutting) fancy; something the two would casually mention incidentally. That is until Silver landed on the perfect name for a Trixie Mattel vacation spot: Trixie Motel.

The name was too perfect for a passing idea. So, the two hit the market; leisurely at first. The first stirrings of the Trixie Motel had come to them in 2017. It wasn’t until 2020 when Firkus sent Silver the link that would change everything along with a pop gun text: “I found the motel!” The location was right. The price was right. And the color was so wrong it was right; a plebeian-punctuating pink. Sure, it may have needed a couple fresh coats of paint. But if the motel needed more pink, Trixie Mattell may as well have been its fairy godmother.

The Making of the Trixie Motel

The stars seemed to be aligning for the Trixie Motel. But Firkus thought it could use a bit more star power. So, he put in a call to the Scott Brothers, better known as the stars of HGTV’s Property Brothers. Firkus and Silver explained their plans to the Scott Brothers, as well as their proposed budget. The idea of one of the most popular personas in Ru Paul’s Drag Race history teaming up with the titans of televised renovation was too good to stay behind-the-scenes. So, Discovery+ sent out their camera crew to document the entire process. Trixie Motel aired its eight-episode run over the summer, warming audiences up for the boutique vacation spot’s opening.

Firkus (and by extension Mattel), Silver, and the Scott Brothers had their work cut out for them. The Coral Sands Inn was a pink shadow of the vibrant Trixie Motel. Firkus estimated it would take about $500,000 to elevate it to Mattel’s standards. Fortunately, they had expert help from interior designer Dani Dazey, project manager David Rios, and a revolving door of special guests.

Mattel designed the motel to be an extension of herself; tourist trap Trixie. Just a quick glance at the motel’s official website shows the many facets of this pink desert gem. The Pink Flamingo Suite juxtaposes soft, powdery pink tones against zesty green with elegant avian grace. It’s a stark contrast to the cosmic Atomic Bombshell Room with salmon sunset pinks cooled by galactic blues in planetary patterns. And those only hint at the delightfully distorted Americana that saturates the Yeehaw Cowgirl Suite perfect for rhinestone cow(insert pronoun)s. These are just a few of the seven diverse rooms including three suites, three queen rooms, and the honeymoon suite.

Mattel’s dedication to her vision found her exceeding budget for a grand total of $565,000. But this meant she could fully renovate each room to include unique headboards, themed wallpaper, custom murals, and interior design that makes Pee Wee’s Playhouse look like a Supermax prison.

Of course, no Palm Springs hotel is worth its salt without a pool. And the Trixie Motel accommodates in trademark style. Replete with pale-and-pink comfy sun loungers beneath matching tasseled parasols, the swimming pool area offers a soothing sanctuary from desert heat. Pink plastic flamingos graze at the periphery, marked by looming palms gently swaying in the breeze.

The final stop of the Trixie Motel is the shop offering all manner of iconic souvenirs and Trixie-approved merch. You’ll find everything from t-shirts and swimwear to retro Barbie dolls (the inspiration behind the Mattel surname).

While the Trixie Motel is already booked out for the remainder of the summer, you can head over to their booking calendar to see what’s available later in the year. Prices begin at $550 a night; a modest amount for a Palm Springs boutique hotel with so much clout. Of course, there are plenty of other boutique hotels in the area. But they probably won’t be as fabulous. And they definitely won’t be as pink.