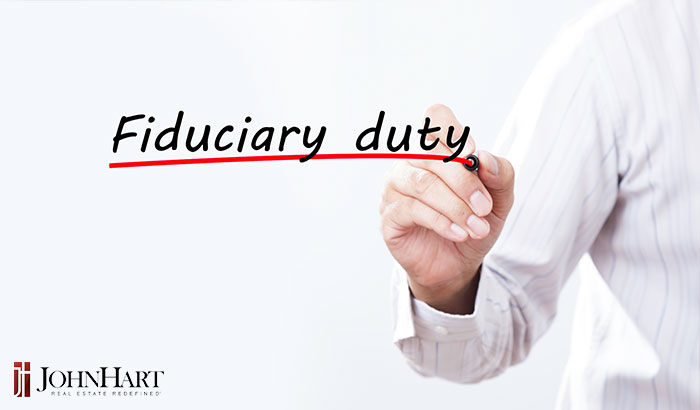 Real estate agents and brokers in California have a fiduciary duty to act in a manner that is consistent with the best interests of the client.  A fiduciary duty encompasses several obligations, among them: the duties of care, loyalty, honesty, accounting, and obedience.  This article will discuss what is meant by each of those obligations, and some common breaches as described in recent California case law, as well as best practices to minimize any potential issues.

First, is the duty of care.  The law assumes that by virtue of being a real estate agent and/or broker, the agent or broker has a higher knowledge and skill compared to a typical buyer.  Accordingly, even if you did not know something, you can still be held liable if you should have known something.  For instance, in one California case an agent was sued for breach of fiduciary duty and negligence when he failed to spot the fact that a house was over 1,000 sq. ft. less than it was listed at.  This was the case even though he was relying on the information provided by the seller.  Nevertheless, the court found there was a triable issue of fact as to whether he should have known that the house was approximately 20% smaller than it was listed at. Of course, this is a somewhat extreme example and it is doubtful that a house that was only say 2-3% smaller would produce the same result.  That said, it is illustrative of the duty of care and why agents should check and doublecheck every piece of information they receive and encourage clients to do the same.

The duty of loyalty means that an agent cannot disclose any confidential information of the client without the client’s consent.  This duty continues even after the agency is terminated.  Of course, this in and of itself presents difficulties because virtually any real estate transaction involves the disclosure of some unfavorable facts.  In many instances, in fact, one might be required to disclose unfavorable facts about the house or face legal liability.  Therefore, one should always be careful to discuss this with the client and obtain consent to disclose.

For instance, while you may have to disclose some unfavorable facts, such as whether someone recently died in the house, disclosing other unfavorable facts, such as that a client is desperate to sell for some personal or financial reason, could form grounds for breach of the duty of loyalty.  In any event, the best course of action is to speak with your client about exactly what facts you are going to disclose and obtain their consent to disclose prior to going through with anything.  Inevitably, clients may be concerned or unhappy about certain disclosures, but if you get informed consent, such concerns usually do not translate into litigation.

The duty of honesty can sometimes come into conflict with the duty of loyalty.  This duty extends to all people in a given transaction.  Of course, that means you must be scrupulously honest with your own client, but also any statements you make to any other person in a transaction must be honest to the best of your knowledge.  Balancing these competing duties can sometimes create conflict between you and your client.  Here again, the best course of action is to speak with your client.  If there is a tension, explain what must be disclosed and why it must be disclosed.  However, if they otherwise confide in you something that need not be disclosed, explain that you will keep it strictly confidential unless directed otherwise.

An agent’s duties regarding accounting are straight forward; agents and brokers have a duty to account for all monies receive and disbursed and to remit monies owed in a prompt manner.  This is simultaneously one of the easiest duties to follow and has some of the harshest penalties for non-compliance.  That is because all agents are assumed to know these rules very well, and any deviation from them, however slight, is grounds for suspicion and potential liability. Make sure to account for every cent received from a client and distribute funds on time.  There is very little leeway on issues of this nature.

Finally, there is the duty of obedience.  An agent has a duty to obey all lawful instructions of the client.  Of course, illegal instructions (such as to structure a transaction to illegally avoid tax liability, or to refuse to sell to someone based on a protected category such as race, religion, gender, or national origin) need not and should not be followed. Aside from the obvious example of an agent simply disregarding instructions from a client, the main way this duty comes up in case law is when an agent thinks they have authority to do something, but the client later differs.  In most cases, this is the result of the client giving oral instructions which the parties later disagree about.

Of course, one of the easiest ways of avoiding such a situation is to ensure any major change is confirmed in writing.  For instance, if you have a call where the client gives you a major change in instructions simply confirm it by text or email later.  This is a good way of operating even if you later also have the client sign a formal document, because it tends to show you take the client’s instructions seriously and minimizes the chances that someone who later becomes unhappy can claim that they didn’t understand what was going on or didn’t quite understand the nature of a formal document with lots of legalese in it.  A simple text or email confirming a change, phrased, as much as possible, in layman’s terms can go along way in preventing any issues later.

Ultimately, like most professions, real estate agents and brokers have serious fiduciary duties to each client, and in certain cases, anyone they professionally interact with.  Breaches of these duties are one of the main causes of litigation against real estate professionals.  However, one need not stress too much, as following some simple rules as outlined above can minimize risk to a great degree.