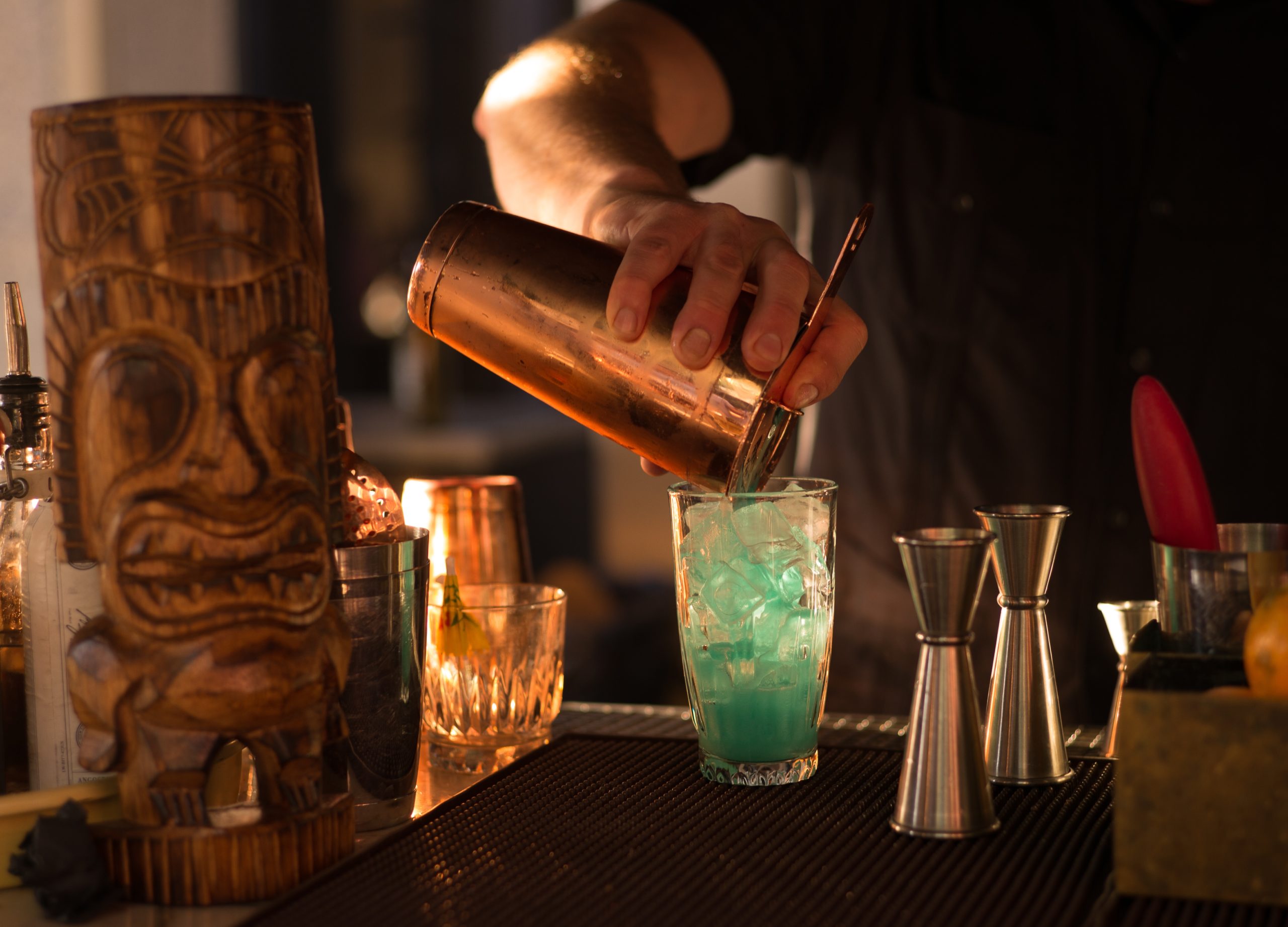 Okay, the holidays are over, so can we get tropical again? Considering the last few weeks have felt like a tropical storm descending on LA, we’d say yes. And while tinseltown isn’t exactly the Polynesian Islands, this is a city that knows how to get tropical. Just look at our near century of tiki culture. It all started in 1934 when Ernest Gannt first opened the doors of the legendary Don the Beachcomber in Hollywood. This was the first tiki bar Los Angeles scenesters would frequent, but far from the last. And while Don the Beachcomber may be long gone, a myriad of kitschy oases have bloomed all over the city. Today, we take a closer look at some of the best.

Tonga Hut: A No Frills Bar with Character… and Even More History

Why not start at the beginning? LA’s oldest surviving tiki bar is North Hollywood’s Tonga Hut. Patrons can expect the typical tiki trappings done big; looming Easter Island stone heads, drooling idols, and booths with thatched roofs. Born from the vision of brothers Edwin and Ace Libby, Tonga Hut opened its doors in 1958. And since that day, very few aspects of the physical area have changed.

Local tiki bars can’t boast the kind of lore that Tonga Hut has cultivated over the years. For example, regulars are invited to run through a 78-cocktail gauntlet to earn the honor and notoriety of a place on their wall of fame. Those who succeed join the ranks of The Order of the Drooling Bastard, taking its name from the bar’s iconic stone water fountain idol. They also get a dollar off drinks for life. But if you’re thinking 78 cocktails sounds like a Polynesian breeze, there’s one caveat. The hopeful inductee must imbibe all 78 drinks within a year’s time.

Then, there’s the legend of Dottie, a Tonga Hut regular of 49 years despite being a devout scotch-and-soda drinker. She frequented Tonga Hut six days a week with her husband until his passing in 1980. Yet, even then, she continued her schedule, sitting in the same seat and ordering the same drink until her death in early 2010. To this day, Tonga Hut reserves Dottie’s favorite seat for her spirit during their regular happy hour.

Therefore, Tonga Hut is a tiki bar Los Angeles historians recognize, whether they drink or not. The bar also has a sister location in Palm Springs, walking distance from JohnHart’s Palm Canyon Drive office. Coincidence? Probably. But, for the sake of this blog, let’s just say it isn’t.

Tiki-Ti may not be the oldest tiki bar Los Angeles hosts, but Tonga Hut only beat it by three years. And Tiki-Ti boasts an arguably even more impressive link to the past. Its founder, Ray Buhen, was a legend in his own right, having worked as a mixologist at the original Don the Beachcomber! Ray joined the staff at Don’s in 1937, but it wasn’t until 1961 that he took the plunge with Tiki-Ti, his own tiki bar.

Tiki elitists will quickly tell you that Tiki-Ti’s secret recipes are the closest surviving link available to a Don the Beachcomber original. That’s because Ray passed those recipes, along with some of his own, to his family who still sling that sweet, sweet sugary sauce to this day. On weekends, you’ll find lines pouring out onto Sunset Boulevard as Ray’s son Mike and his son Mike mix drink after drink. Tiki-Ti is notoriously small, so the wait for entry can be lengthy. But almost everyone who samples a signature Ray’s Mistake agrees that it’s worth it.

Inside, you’re greeted with puffer fish lamps, pirate skulls, and tiki mugs displayed like cherished relics. But you’ll have to sail the sea of people to get to the bar. There, you can choose from dozens upon dozens of drinks with exotic, hard-to-place flavors. It’s hard to believe that the grog-granting grotto was at one time a violin shop owned by Buhen’s father-in-law!

Tiki-Ti is normally only open Wednesdays through Saturdays. Even then, it’s a good idea to call ahead. The tiki bar has been known to shut for weeks at a time to accommodate the Buhen family’s travels.

Anyone passingly familiar with Clifton’s Cafeteria is likely wondering why it’s on a list of the best tiki bars Los Angeles residents frequent. After all, with all of the weird, wild history at Clifton’s, tiki culture wasn’t ever really a factor. Yet, in late 2016, the tiki craze finally got Clifton’s. Although if you’ve been there recently and hadn’t noticed a tiki bar, you could be forgiven.

You see, the Pacific Seas (the name of the hidden tiki bar inside of Clifton’s) is mysteriously tucked away behind a magic mirror. And even by writing this, we’ve probably given too much away. But once you find your way to Clifton’s speakeasy-style tiki retreat, you’ll feel like you reached your own fantasy island.

Compared to some of the other tiki bars on this list, the Pacific Seas opts for modest decoration. But since we’re talking about tiki bars, “modest” means a genuine boat in the center of the space. Just make sure to dress appropriately. Clifton’s enforces a dress code that may not jive with the “come as you are” islander vibe you’re expecting.

Tiki No: The Bar That Proves “New” Isn’t Necessarily a Bad Thing

The Pacific Seas illustrates that not every tiki bar Los Angeles harbors is steeped in history. North Hollywood’s Tiki No is also a somewhat new kid on the block…er, island chain, opening for business in 2010. And though it has plenty of booths and bar seating, you’ll have to turn up early on a weekend to snag a seat. Otherwise, it’s often standing room only.

Tiki No has the benefit of being designed by tiki legend “Bamboo” Ben Bassham. If you’re unfamiliar with Bamboo Ben, his woodwork and Polynesian-inspired designs grace tiki bars the world over. His family has been crafting similar aesthetics since the Great Depression, so tiki chic comes easily to Bamboo Ben.

Naturally, you’ll see wall-to-wall bamboo when you walk in. But you’ll also find cozy couple’s booths as well as seating options for larger parties. And all of the other tiki hallmarks are there: puffer fish lamps, tiki mugs, the works. But the real draw for Tiki No is the drink selection. While sparer in selection than many of the other tiki establishments on this list, Tiki No’s original drinks are heavenly. Just try the Lychee Luau and tell us you don’t agree.

You may even spot the odd celebrity getting tiki freaky. There was a time when Elijah Wood was seen behind the Tiki No DJ booth as often as he was spotted on the silver screen!

Having opened in early 2019, the Bamboo Club may be the newest tiki bar Los Angeles has to offer. Situated in Long Beach’s lovely Zaferia neighborhood, the Bamboo Club is yet another tiki bar graced by Bamboo Ben’s aesthetic skill. And compared to the other offerings on our list, it has a lot more space. However, a good deal of that is thanks to its less stylish outdoor seating area.

Overall, the Bamboo Club isn’t quite as gloriously gaudy as some of the most popular LA tiki bars. Rather, the space is built around a central tiki hut complete with thatched roof. There are ample booths for groups as well as a modest dance floor. And there’s a DJ booth to keep that dance floor packed on weekends.

But the Bamboo Club truly excels in three distinct areas: service, drinks, and food. That’s right; the food at the Bamboo Club is actually good! It has a full menu to complement its extensive drink selection along with table service. So, the next time you’re in Long Beach and the tiki gods demand their offering, give the Bamboo Club a try. And may they bless you with minimal to no hangover.