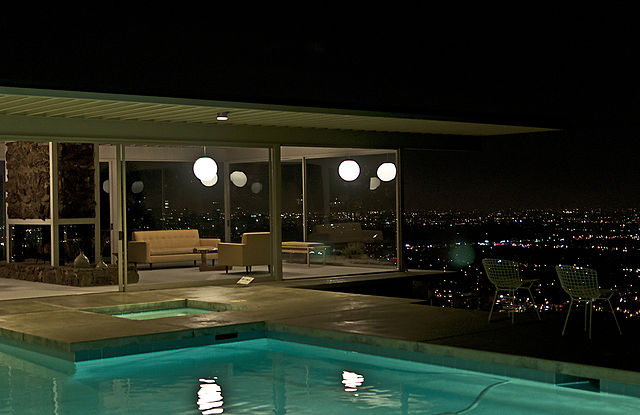 It’s not often that we get to witness experiments in architecture while they’re in motion. Yet, that’s exactly the experience case study houses offer. Arts & Architecture magazine challenged notable architects to create affordable homes to address the U.S.’s residential housing boom. With World War II finally coming to an end, millions of soldiers were returning home to start families or pick up where they’d left off. The need for new housing was crucial. Arts & Architecture funded the experiment which ran just over two decades from 1945 until 1966. While one of the homes was built in Northern California and another in Phoenix, Arizona, most were erected in the Southern California region. Today, we take a closer look at this innovative moment in California’s housing history.

It’s safe to say that the project piqued the public’s curiosity, drawing over 350,000 visitors to the initial six houses revealed in 1948. But Arts & Architecture did what it could to bring the case study houses to the Americans who couldn’t make the pilgrimage themselves.

The magazine regularly featured the completed homes in its pages, often supported by the keen eye of photographer Julius Shulman. Working in moody black-and-white, Shulman brought a classiness to his legendary shots of the forward-thinking domiciles. Furthermore, having specialized in architectural photography, Shulman fit naturally into the ambitious project.

Of course, his photographs benefited from the otherworldly glamor of Southern California. Homes perched proudly atop Hollywood hilltops with the stars seeming to bow at their feet. Other times, the open promises of the Pacific Ocean lapped at the perimeter while palms kissed cloudless skies.

In a world that had recently clawed itself out of the burned out crater of a devastating war, Arts & Architecture offered a “happily ever after” that was just sensible enough to believe. Soon, the case study houses became synonymous with the aesthetic of post-war Southern California.

The completed case study houses haven’t always had an easy time over the resulting decades. Some owners remodeled homes beyond recognition. Others razed them altogether.

But in 2013, the Los Angeles Conservancy Modern Committee petitioned to include 11 of the homes in the national registry. These homes range throughout Southern California, from Ventura to San Diego, though most stand in the Greater Los Angeles area.

Ultimately, the National Register of Historic Places accepted ten of these homes. The 11th would have made the list as well, but the private owner requested the home not appear on the official register. However, the California Environmental Quality Act (CEQA) has protected all 11 of these case study houses since July 24, 2013.

While the Los Angeles Conservancy Modern Committee nominated whatever case study houses they could, some didn’t make the list. They excluded extensively remodeled properties. Yet, the successful inclusion of the 11 petitioned properties paved the way to potentially include remodeled properties in the future. Additionally, the committee neglected to nominate other well-known case study homes, such as the Eames house, simply because they already appeared on the register.

Of the 11 homes submitted for registry, eight stand in Los Angeles County. Two more are located in San Diego County and another in Ventura County. Perhaps we’ll review those at a later date in our Los Angeles Home Spotlight column. But for today, we’re going to focus on the Los Angeles County offerings to the registry.

Don’t let the number system fool you. Case study house #1 was not the program’s first home to be constructed. Thus, we introduce the notoriously irrational numbering system of the case study program. Even the editor of Arts & Architecture admitted there’s little to no rhyme or reason to the numbers.

J.R. Davidson, a force in the early days of California architecture, designed this home with the assistance of his wife, Greta. Efficiency was at the heart of the architecture as the Davidsons envisioned the busy lives of two working parents. Case study house #1 would allow working families more free time by keeping daily maintenance to a minimum.

This case study abode also introduced a series of features that became hallmarks of the program including:

Case study home #9 is popularly recognized as the Entenza House since it was built for Arts & Architecture’s editor and publisher John Entenza. Designers Charles Eames and Eero Saarinen challenged themselves to offer a wealth of space with simple, minimalist construction. The home, built from a steel frame and covered in wood-paneling, overlooks the Pacific Ocean from a scenic hill in Pacific Palisades.

This tri-level structure would have existed regardless of the case study program. That’s because it wasn’t built in response to the program. Rather, it just happened to fit many of the ideals of the program including:

So, how did this unrelated structure come to be case study house #10? Just two years into the case study program, Arts & Architecture were having trouble keeping a consistent pace. Without the completion of a new house on the horizon, they needed to find a way to keep the inertia.

So, despite the fact that Kemper Nomland and son had already built the home without regard to the program, its symbiosis found it ripe for inclusion. The Nomlands used the home’s multi-level design to fit it to a Pasadena hillside. In 2017, it sold to comedian, actress, and Saturday Night Live alum Kristen Wiig.

The designer of case study home #16 (although that number changes depending on who you ask) was one of the most prolific in the program. So, it may come as a surprise that Craig Ellwood actually had no formal design instruction. Rather, he learned what he knew through his contracting work. It was enough to place his homes not once, not twice, but three times in the case study program.

Sadly, two of Ellwood’s designs have been remodeled beyond recognition. Thus, case study home #16 is the only remainder we have of his unique vision in relation to the program. Ellwood was noted for his propensity to use industrial materials and techniques for residential purposes.

But, as this home illustrates, he also had a gift for blending interiors and exteriors. This Bel Air home blurs the lines between the inside and outside by stretching inner walls beyond the outer walls.

Pacific Palisades was a popular place for the case study program. Though it appears later on the list than home #8, home #18 (sometimes referred to as 18A) was the first to be completed in the area. Overlooking the tumultuous Pacific Ocean, the structure is built atop a cliff far away from the battering waves. It’s also positioned back from the cliff’s edge to reduce the roar of the sea.

But perhaps the most notable feature of Rodney Walker’s contribution to the program is the fireplace. The floor-to-ceiling double-sided brick fireplace is shared by a living room on one side and an interior garden room on the other. Three neighboring homes, including the aforementioned #8, would join #18 in the case study program over the next few years.

While the majority of case study houses being built in the late 1950s employed steel, case study house #20 was crafted from a variety of natural woods. The design team from architectural firm Buff, Straub, and Hensman leveled a decaying estate in Altadena to bring their economical vision to life. The idea was to create a home for young parents who couldn’t afford more than the essentials. However, the home went to industrial designer Saul Bass and his biochemist wife Dr. Ruth Bass.

Pierre Konig was a regular contributor to the case study program with his steel framed take on residential living. It was a trend that never quite caught on, but not for his lack of trying. One of the most notable case study houses, the Stahl House (#22 for those counting at home), was a result of Koenig’s lust for steel.

Case study house #21 was dreamt up as a model for efficient modern living with the possibility of mass production. But it was originally distinguished by a surrounding moat. The home was accessible via walkways at the front entry and carport. Though this property was extensively remodeled over the decades, Koenig returned to it in the 1990s to attempt to aid in its return to its original vision.

Easily the most iconic of the case study homes on this list, case study house #22 is reserved for Koenig’s aforementioned Stahl House. It seems to float above the Greater Los Angeles area, kissing the interminable blue sky with the corners of its flat roof. To create this effect, Koenig employed the largest piece of glass available to commercial enterprises at the time. Furthermore, Koenig worked with the cliff’s edge site instead of against it to create a piece of LA history you can visit to this day.

The Aftermath of the Case Study Program

While the case study program aimed to build 36 examples of modern living, builders never completed (or even started) several planned homes. For example, case study house #19 would have been erected in the San Francisco Bay area. On the other hand, home #27 wouldn’t have even been in California. It was marked to be constructed in Smoke Rise, New Jersey.

The majority of LA’s remaining case study houses are private residences, yet two remain open to public tours. The Eames and Stahl Houses can be visited by scheduling a tour through their respective websites.

Will we ever see another age of innovation like the case study houses commissioned by Arts & Architecture magazine? It’s hard to say, but we hope it doesn’t take us another war to get there.