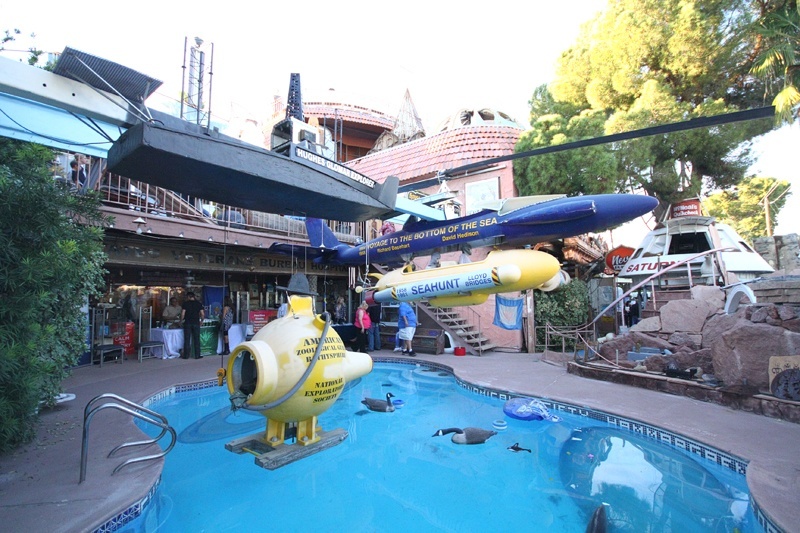 Update 09/21/22: Paradise Crest Manor’s owner has reached out to us regarding this blog to point out certain inaccuracies that have since been corrected.

Collectors share a similar compulsion. Yet, the subjects of their obsessions can be radically diverse. Some might collect I Love Lucy memorabilia. Others might collect the dried husks of dead butterflies. Big ticket collectors might boast garages full of classic cars. Broke collectors might write down in a tattered notebook a collection of vanity plates they see in their travels. But when you meet retired brain surgeon and former Nevada Lieutenant Governor Lonnie Hammargren, don’t bother asking him what he collects. He’ll probably just answer “yes.” That’s because, as the subject of our latest Las Vegas Home Spotlight illustrates, Hammargren seems to collect everything. The one condition? It has to be weird. And for a time, one of the world’s largest collections of oddities could be found in three buildings located at 4318 Ridgecrest Drive. In those days it was popularly referred to as the Lonnie Hammargren house.

Where Do You House the World’s Biggest Collection of Oddities?

It was back in 1971 that the eccentric Hammargren moved into the main home he’d later dub Castillo del Sol. Yet, despite a different name and a different owner, many Vegas natives still recognize it to this day as the Lonnie Hammargren house. As we mentioned, Hammargren was a collector of the strange and unusual. And his desire to add to this collection seemed boundless.

In its prime, one could sift through Hammargren’s assortment of oddities and find genuine human skulls and metallic animals in coital reverie. Rare military uniforms juxtaposed religious statues and antique diver’s helmets. Old medical equipment competed for attention with forgotten Vegas props. And, yes, there’s a looming statue of a dinosaur holding a hot dog. All of this and more saturated every nook and cranny of the Lonnie Hammargren house.

Soon the collection outgrew the space. Some may have seen this as the limit, but not Hammargren. Instead, he simply purchased two neighboring homes to the north of the property and proceeded to fill them (and their yards) with the strangest artifacts he could find. Even then, he found himself needing to build an expansion onto the original building.

Soon, the first building which had once constituted the entirety of the Lonnie Hammargren house boasted its own planetarium, rooftop solar observatory deck, and an entire space dedicated to former president Teddy Roosevelt. But perhaps the home’s crowning achievement was its “gondola room”. The authentic 36-foot Venetian gondola, rumored to be one of the world’s oldest, drifted in its own dedicated indoor pool. It was so cumbersome that its room had to be constructed around the massive boat.

In days when visitors could tour the Lonnie Hammargren house, they’d find tens of thousands of curiosities distributed across the site. Some even spilled out into the yard including several too large to be housed. Eventually, Hammargren connected two of the buildings with bridgework. The site was just as much a work in progress as the collection it accommodated.

Some collectors prefer to hoard their commodities in privacy. Others want to put their treasures on display for the like minded to appreciate. Hammargren numbered among the latter. For a time, Las Vegas citizens could count on the Lonnie Hammargren house opening its doors to the curious public every Nevada Day.

While Hammargren couldn’t handle the burden of guiding the tours himself, he was often onhand to excitedly answer questions. His neighbors were less thrilled about the public love of curiosities. And they were downright livid about the lack of street parking. So after a number of complaints, Hammargren dialed back public tours of the property. Yet, passersby could still catch glimpses of the collection pouring from the home (including the massive hot dog-holding tyrannosaurus rex statue in the backyard).

Yet, as time passed, Hammargren found more serious issues than neighborhood disapproval. His collection had broken through the constraints of physical structure. But when it outpaced Hammargren’s fortune, the seemingly limitless collection finally recognized its border.

Unfortunately, by this point, Hammargren was already in significant debt. The primary structure of the Lonnie Hammargren house had to be sold. Certain collector’s pieces had become fixtures in that building and thus had to be left behind. Chief among them was a staircase that had been excavated from Liberace’s pioneering residency at the Riviera Casino.

But even this wasn’t enough to pull Hammargren out of crippling debt. He spent the next period of time painfully whittling down his beloved collection piece by piece. This closed the era of the Lonnie Hammargren house. And while Hammargren was doubtlessly devastated by the slow death of his dream, he couldn’t have predicted what the future held.

A New Era for an Old Dream

In 2017, Amber Softing purchased the Lonnie Hammargren house with her husband, Mike. Amber had grown up in the area, but was only passingly aware of the home. Her mother had driven her passed the area, but she was unaware of the home’s eccentricities until she was standing face to face with it as her realtor gave her a tour a week before she purchased it. Making use of his construction background, Mike began to work his magic to make the home truly theirs.

Lonnie Hammargren had left a looming legacy. Rather than resist the strange siren song that had lured Hammargren into the jagged rocks, the Softings leaned into it. Along with their renovations, they also began to track down wayward pieces of Hammargren’s collection. Through their efforts, many of these pieces have been returned to the home.

Passing on the Secondhand Crown

Initially, Softing was concerned about taking up Hammargen’s crusade. She recognized perhaps better than anyone how much the collection meant to him. It wasn’t a given he’d look kindly on someone else moving into his former home and carrying on his secondhand legacy. But perhaps Hammargren recognized that the vast majority of his collection had once belonged to other people. And many of those items figured into those people’s dreams. Because Hammargren didn’t regard the Softings as rivals, but instead as kindred collectors.

The former Lonnie Hammargren house is the shared dream of the Softings now. And they’ve rechristened the home and all of its curiosities Paradise Crest Manor. Hammargren even contributed personally to the Softings’ treasure trove. Notably, he gifted the couple an intricate model of the late Desert Inn hotel and casino.

The Softings have adopted a more private approach to their collection. When Nevada Day comes along this year, their doors will remain closed. But those searching for curiosities or nostalgia can still check in with the Softings as they document their progress on their devoted YouTube channel entitled My Crazy House.

Then, of course, there’s Halloween. The Softings have started to create their own tradition of opening up Paradise Crest Manor’s backyard to celebrate the spooky night. Plenty of Hammargren’s collection pieces make a cameo in the haunted walkthrough. The Hammargrens even join in on the act with the Halloween festivities extending to their backyard as well.

The event, dubbed Monsters at the Manor, has become a success in its own rite over the years. Amber Softing estimates around 5,000 people passed through her backyard in 2019. While Covid shut down the home’s Halloween events for a couple years, the Softings are already teasing a special Halloween announcement for this year. The event starts at 5:30pm until 9:00pm… one night only! So, if you’re looking for a truly unique celebration of the bold and the odd, you know your opportunity!

Living in a Dream

It’s the Softings dream now. Where once stood Castillo del Sol now stands Paradise Crest Manor. But for some Vegas residents, the memories alone will carry on the unofficial name of the Lonnie Hammargren house. When Hammargren still lived in the main building now occupied by the Softings, he had a subterranean wine cellar built. It was designed to mimic a regal Egyptian tomb, with brilliant paintings and hieroglyphics saturating the walls. This is where Lonnie Hammargren intended to be buried. Perhaps Amber Softing reminded him that we aren’t meant to be buried in our dreams. But if we’re fortunate enough, we can live in them.