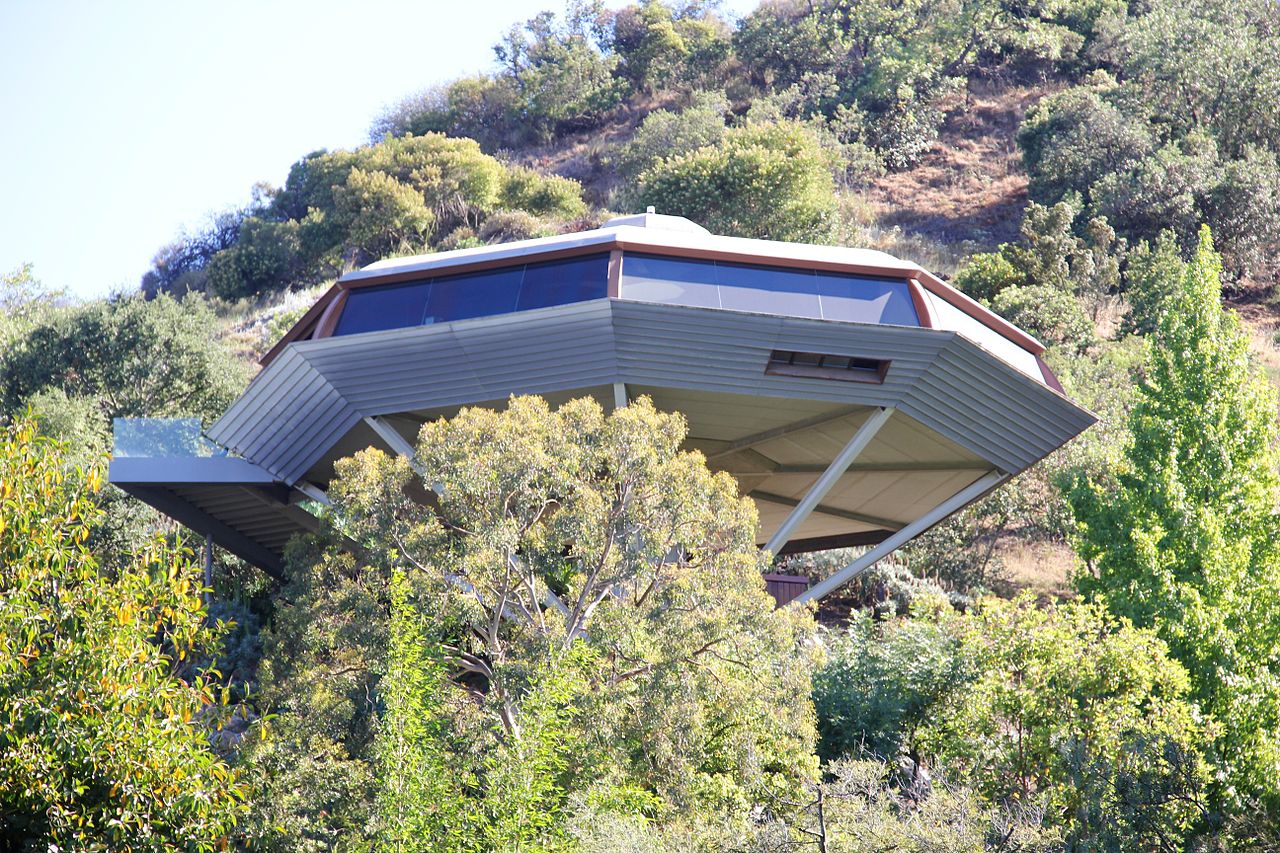 The next time you’re traveling southbound on the 101 freeway, take a glance upward into the Hollywood Hills. But be sure to allow yourself time for a double take. That’s because you’re likely to see what looks at first glance like a flying saucer crashed into the hillside. But this structure perched in a seemingly precarious position overlooking Universal City has never taken flight. And it’s definitely been identified by architecture fans the world over. The seemingly impossible octagonal oddity is actually one of the most recognized homes in Hollywood and the subject of this week’s Los Angeles Home Spotlight. No need for a space suit as we ascend into the Chemosphere.

Feet on the Ground, Head in the Chemosphere

Leonard Malin wasn’t your average aerospace engineer (assuming anyone who chooses a career in aerospace can be average). In a world where his nine-to-five found him looking to the stars, his ambitious dreams required him to stay grounded. He’d made a living using applicable science to help mankind explore the sprawling expanse of stars above. But he wanted a dream home for his family just like anybody else. And his dream required him to use that same grounded knowledge in ways so innovative that architectural enthusiasts are still picking their jaws up from the floor.

Malin’s father-in-law gifted him a plot of land in the coveted Hollywood Hills to follow his dream. But there was a catch. A 45° slope distinguished the land, leading to costly if not outright impossible construction conditions. And Malin was not the entrepreneurial investor so often found at the center of these home spotlight tales. He was a simple working man with an accumulated savings of $30,000. It wasn’t the most modest of amounts. But it also wasn’t enough to create his geometric oasis in the clouds. Not without some legendary ingenuity, anyway.

Making a Mountain of a Hollywood Hill

Malin needed help to bring his Mid-Century modernist dream into the real world. He knew he needed the best. Therefore, he turned to none other than architectural legend John Lautner. Regular readers of the JohnHart blog may recall Lautner’s recent appearance as the embattled architect who designed the massive Bob Hope home in Palm Springs. He’d made a career of pushing the boundaries in architecture. Malin no doubt recognized a kindred spirit; someone striving to achieve the impossible through rigid, unrelenting structural laws.

Despite his prowess, Lautner found the home that would come to be known as the Chemosphere a perplexing puzzle. Legend has it that he spent weeks pacing that hill until late into the night. Its structural hubris was nothing short of baffling. Neighbors recounted how a single red cigarette cherry punctuated the nights. Perched somewhere among the arid flora of that frustrating hill, Lautner revisited the challenges over and over again. With four different drafts drawn up, no design seemed quite feasible.

Malin was reportedly growing impatient by this point. His innovative approach was instrumental in finding solutions to the home’s tricky mechanics. But Lautner lacked Malin’s faith. On the verge of throwing in the towel, Lautner produced an envelope bearing a basic sketch of the potential home. But then he began to explore an idea he’d been toying with over his weeks-long planning period. He’d been gradually moving elements of the home from the sloping hill to a much more stable umbrella-shaped platform. Then, it hit him. If the entire house were to be placed on the platform, it just might have a chance of working.

The Ingenuity Supporting the Chemosphere Design

Lautner officially commenced construction of the Chemosphere in 1960. Most crews with the unenviable task of building a structure on a 45° slope would employ one of two methods:

Both of these methods were far more expensive than Malin could afford. Thankfully, his engineering innovation allowed him to cook up a method that was half the cost. By building the oddly shaped single story home atop a 30-foot tall, five-foot wide concrete platform, Malin and Lautner would leave the natural environment largely undisturbed.

The Sponsorship That Inspired the Chemosphere Name

Engineering alone wouldn’t have brought Malin’s Chemosphere to fruition. He also needed to use a silver tongue to persuade sponsors to join him in his dream. These days, it’s difficult to imagine an engineer meeting with the board of a chemical company seeking assistance with his dream home. Yet, his description of the Chemosphere seemed to energize all who heard it. He’d lovingly explain the looming octagonal structure crowning a nearly 30-foot tall, five-foot wide concrete pillar. It had all the audacity of a megalopolis built in the middle of a desert and sustaining on the dreams of the world around it.

The Malin House is the official name of the home that Malin and Lautner created.  “Chemosphere” was a nickname owing to one of the Los Angeles home’s most prominent sponsors. The Chem Seal Corporation churned out the coatings, resins and polymers that became instrumental in the Chemosphere home’s construction. At least one of these formulas was instrumental in reinforcing the structure’s stability and stabilizing its hillside protrusion. Lautner likely harbored disappointment over the popularity of the Chemosphere moniker. He’d wanted to call it “Chapiteau.”

Southern California Gas, a company no doubt familiar to contemporary Angelenos, was the other of Malin’s major sponsors. They provided heating, cooling, and other appliances in exchange for the use of the Chemosphere in advertising materials.

Together, these sponsorships helped to partially subsidize the nearly $140,000 cost of creating the Chemosphere. This amount would roughly translate to $1.4 million in 2022, so it was a considerable amount of money for the time. But Malin only put a price on the impossible through necessity. By completion, the Chemosphere demanded $80,000 of Malin’s personal funds… over double his savings.

The Structure of the Chemosphere

An initial glimpse of the Chemosphere can be startling. After all, it fleetingly appears like a structure levitating mysteriously above the hillside. Wreathed in windows, it takes on the look of a b-movie flying saucer. It also includes a downfacing window on the structure’s lower surface that overlooks the carport. Here, a funicular pulls residents and guests up the sloping hillside, terminating at a bridgeway that connects to an entry point near the home’s kitchen.

A surprising 2,200-sqft of living space seems to balance atop the thin-by-comparison concrete rod that holds the Chemosphere aloft. In an area in which mudslides and earthquakes regularly result in the ruin of hillside mansions, the structure’s design seems precarious. But beneath the surface, a concrete disk nearly 20-feet in diameter anchors the home. It has effectively protected the residence from considerably sized earthquakes over the decades. The area’s potential for earthquakes also influenced the materials used to build the Chemosphere. Aside from the chemical components, timber and steel primarily make up the home with laminated wood reinforcing the roof.

A welcoming fireplace punctuates the robust brick wall that splits the Chemosphere’s interior. Bedrooms, bathrooms, and the laundry room make up the side of the home facing the hillside. The other half of the home accommodates living and dining areas as well as the kitchen. From these rooms, the Malin family could enjoy a panoramic view of Studio City. Malin employed John H. Smith to handle interior decoration. Smith is often recognized for his historic inclusion as the first African American in the National Society of Interior Designers.

Malin and his family were only able to live the dream for a little over a decade. By 1972, mounting costs and challenges to the development of the aerospace industry left the engineer financially unstable. To continue covering the costs of raising four children, Malin finally bid adieu to the Chemosphere. The eccentric home sold to Dr. Richard Kuhn in 1972.

Tragically, Dr. Kuhn’s time in the Chemosphere was even shorter. In the summer of 1976, the physician was stabbed to death in a botched robbery. Two men were convicted, one being Dr. Kuhn’s 20-year-old lover. Both were sentenced to life in prison. This ushered in two decades of tumultuous disregard for the Chemosphere. It was relegated to a novelty party house for the latter 10 of those years.

The Revitalization of the Chemosphere

In 1997, the Chemosphere was purchased by noted publisher and patron of the arts Benedikt Taschen. By this point, the home was a tattered shadow of its former glory. A decade of hard partying had stripped interior finishes and left several of its features in disrepair. Fortunately, Taschen had the resources and respect for the Chemosphere’s ingenuity to restore it to its original vision. By 2004, the Chemosphere was officially declared a historical monument. Today, it still has a reputation as a party house under Taschen’s ownership.

In the end, the story of the Chemosphere is largely one about a man’s dreams. Yet, the cerebral pursuits of this tale never stray far from the rigid laws of the physical world. In some ways, this makes their eventual success even more impressive. Like a magician who’s perfected sleight of hand, the boundaries of reality create a far more compelling journey than the mysterious, unexplainable and ultimately lazy explanation of “real magic.” Malin and Lautner teamed up to create an architectural sleight of hand that continues to inspire the people of Los Angeles and beyond. And they did so by clinging so closely to science that their misdirection felt like pure magic.