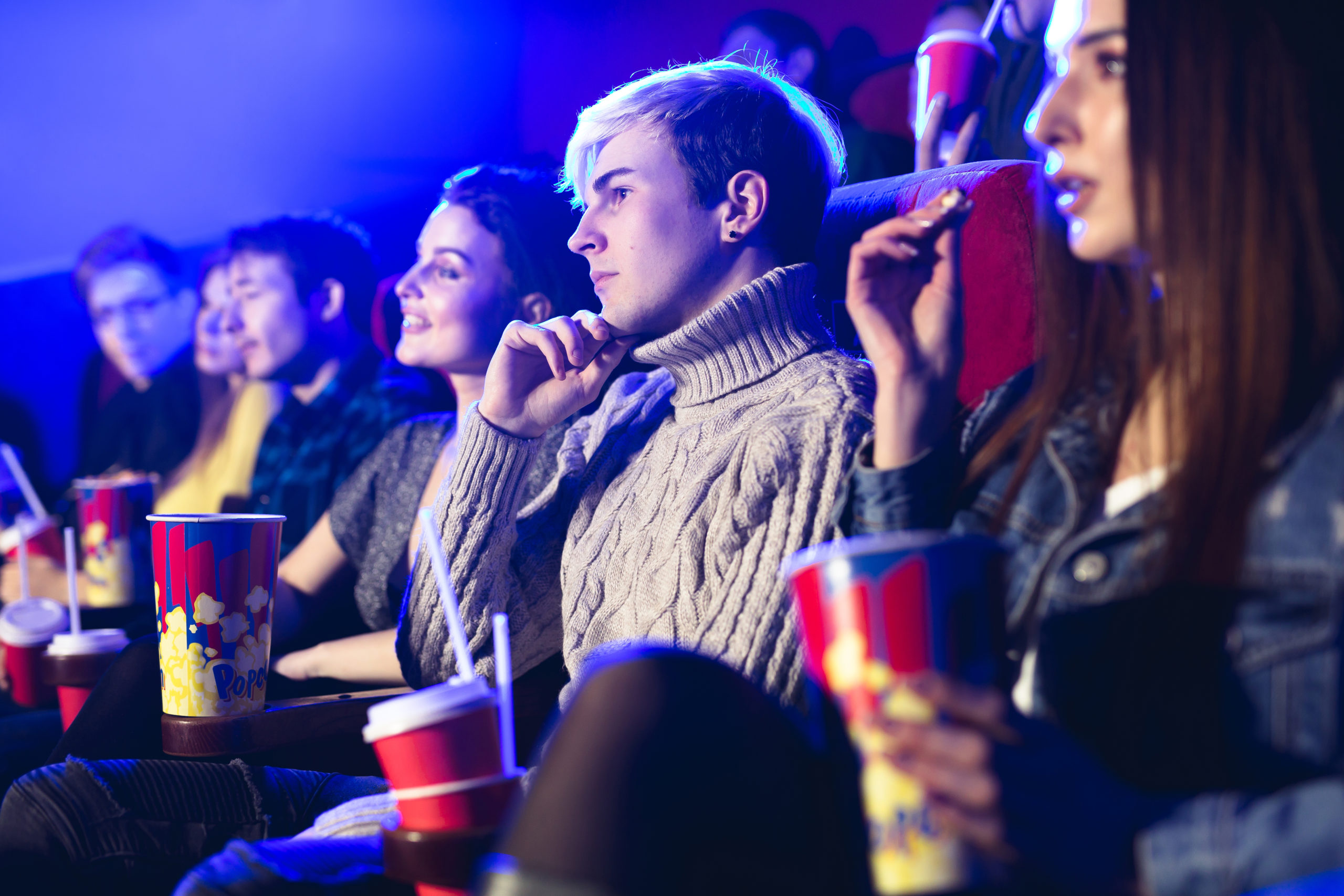 Say what you will about Hollywood, but there’s no denying it. This is a city that loves its work. And by that, we mean the movie industry that makes up an immense portion of the city’s economy. Los Angeles movie theaters are only rivaled in number by Starbucks locations. While most of these theaters are garden variety chains you’d find in any U.S. city, there are exceptions. In a city that worships celluloid dreams, theaters are our temples. Some skew toward spectacle with lavish design and state-of-the-art comfort. Others are more focused on nourishing the soul with impeccable programming. The eight theaters we’re discussing today (plus two bonus theaters) are sure to bless cinephiles with a religious experience. Some notable giants are missing in action (we’re looking at you, Arclight Cinerama Dome). But the key eight theaters we’re exploring below can be enjoyed by Angelenos to this very day.

None of the other Los Angeles movie theaters hold a candle to the TCL Chinese Theatre for sheer iconicism. People across the globe instantly recognize its Far East-inspired facade.

It also houses one of the country’s largest IMAX screens and an impressive seating capacity of 932. The interior of the IMAX theater carries on the themes presented in the facade’s Exotic Revival architecture style. Serpentine trees emboss the walls, rising to a massive central lighting fixture of ornate detail.

Despite the branded “TCL” name, long-time Angeleno’s are still wont to refer to it by its original name, Grauman’s Chinese Theatre. Showman Sid Grauman partially designed it as one of his three noted themed theaters. And, yes, those other two will pop up later on this list. Today, locals regard the Chinese Theatre primarily as a tourist attraction hosting IMAX blockbusters.

Landmark’s Nuart Theatre: The Campiest Calendar of Events in LA

The Nuart Theatre’s neon art deco marquee and straightforward interior can’t rival the architecturally significant designs of several Los Angeles movie theaters. But locals still regard the flagship location for the lauded Landmark Theatre as a cinematic mecca of the west side.

Located just off the 405 freeway, the Nuart has devoted itself to arthouse cinema for years. Even prior to Landmark’s involvement, cinephile’s hailed the theater as a celluloid dreamscape.

Featuring director Q&As, campy programming, and even original bumpers featuring John Waters and David Lynch among others, the Nuart is something special. It’s also LA’s go-to theater for interactive midnight showings of The Rocky Horror Picture Show every Saturday. No timewarp required!

The New Beverly holds a special place in the hearts of many who have grown up with Hollywood. It even hosts a couple of recognizable regulars. You’ll often find legend of cult horror movies and TV Westerns Clu Gulager camped out in his favorite seat in the front row. And renowned director Quentin Tarantino purchased the theater when it was struggling due to his fond memories of the cinema house.

Under Tarantino’s direction, the New Beverly has maintained its cinephile-focused programming. Viewers can count on enjoying their films exclusively in 35mm format. The impressive four-track magnetic stereo presents films without compromise. And as a bonus, the New Beverly often hosts directors, actors and other Hollywood talent for intimate Q&A sessions.

Aside from a neon art deco façade cutting through the night, the Los Feliz 3 isn’t much to look at. It also features two of the tiniest screens on this list. But what it lacks in screen size, it more than makes up for in heart.

Los Feliz locals favor the diminutive theater for its revolving list of indie and arthouse “it” movies. Practically every awards-season darling makes its way through this theater. And many can fondly recount the days of its legendary $6.50 matinee tickets.

But post-pandemic, the Los Feliz 3’s programming was taken over by American Cinematheque. Now it’s finding new life as the place to see cult classics for midnight showings. And as with all American Cinematheque venues, it offers a place for members to hear exclusive talks from their favorite directors (among other perks).

The Alamo Drafthouse is a relatively new addition to the impressive roster of Los Angeles movie theaters. What it lacks in Hollywood history it more than makes up for with a religious zeal for cinema. In fact, if you show up even a minute late, you’ll be denied entry with your ticket refunded or credited to the next showing.

The Alamo uses waitstaff to collect handwritten orders for all manner of food and drinks delivered right to your chair. Does it minimize distraction during a film? Sort of. You still have ushers darting in and out from the aisles collecting orders. But you can tell this is a theater designed by people who love movies for people who love movies.

Just make sure to give yourself plenty of time to park. The parking structure takes you up a seemingly interminable corkscrew and a series of elevators to actually reach the theater! It can be a white knuckle dash to your seat if you don’t plan accordingly.

Santa Monica’s Aero Theatre got its start as a 24-hour movie house for employees of a nearby aerospace plant. It’s yet another of the Los Angeles movie theaters to benefit from American Cinematheque programming. The Aero’s recognizable marquee is somewhat reserved when compared to the other theaters on this list and the interior lacks character. But its programming offers some of the most inspired filmgoing opportunities in the city.

The Aero is possibly best recognized for its October Horrorthons in which it broadcasts seven horror classics back-to-back. Fueled by free candy, food, and prizes, the Horrorthon has become a spectacle over the years. It even features its own unique mascot, dubbed Corn Gorn.

Laemmle Playhouse 7: A Great Representation of a Los Angeles Institution

Laemmle Theaters have been something of a staple in the Greater Los Angeles area since the late 1930s. The family run arthouse chain has used its regional locations to inspire filmmakers and fans alike. Few theater chains can boast the same kind of commitment to widening the audience for auteur filmmakers as Laemmle.

While each Laemmle location can hold its own among the best Los Angeles movie theaters, the Laemmle Playhouse 7 in Pasadena is arguably a fan favorite. It’s also currently undergoing changes. Ownership of the Playhouse 7 was turned over to Landmark Theatres earlier this year. Landmark’s management of the Nuart as the launching point for its chain gives hope for the future of the Playhouse 7. The company has vowed to continue the Laemmle’s mission of screening arthouse and foreign films following theater renovations.

You won’t find obscure arthouse movies at El Capitan Theatre. In fact, you’ll be hard-pressed to find a movie playing with anything harsher than a G rating. But this is one of the most impressively designed Los Angeles movie theaters. Sid Grauman, who was heavily involved in the theming and design of the Chinese Theatre, developed El Capitan around the same time.

Today, it’s owned by Disney and used as a forum to showcase their latest blockbusters in respective quality. As soon as you walk beneath its LED-lit marquee, you’ll recognize you’re in a Disney-approved theater. With its ornate golden arches, vibrant curtains, and flamboyant stage, you’ll feel like you just sat down inside Fantasia. Plus, the theater makes effective use of their genuine 2,500-pipe organ, often with performances opening the shows.

An unofficial addition to this list, the Egyptian Theatre isn’t currently open to the public. It was recently shuttered for renovation following an acquisition by Netflix. Despite promises that American Cinematheque will continue their fantastic programming at the Egyptian, it’s unclear when its doors will open again. And with Netflix currently facing its own financial woes, it’s equally uncertain how these calamities will impact programming.

But its stunning film festivals and Q&As with Hollywood talent aren’t really why the Egyptian deserves honorary mention. It’s more because it’s a movie theater modeled after an Egyptian temple. We hesitate to say “pyramid” because the columnated structure doesn’t evoke a triangular shape.

The Egyptian was another one of Sid Grauman’s “big three” themed Los Angeles movie theaters. Many cinephiles would also probably consider it his best. Its golden scarabs, hieroglyphics, and frescoes were breathtaking. We can only hope they’ll still be there when Netflix completes its renovations.

The Vista: The City Eagerly Awaits the Rebirth of a Classic

A second Egyptian-themed bonus entry? Why are the Egyptian-styled theaters floundering? Is it some kind of curse of the pharaoh’s tomb? The Vista first opened its doors in 1923 when it was known as the Lou Bard Playhouse. It went through several changes over the decades, phasing out its vaudeville performances, reducing its seating capacity for comfort, and even spending a couple decades exclusively showing, ahem, “blue movies”.

So, what is it about Los Angeles movie theaters and ancient Egyptian aesthetics? At the time several of these theaters were being built, a major historical event occurred: the 1922 discovery of King Tut’s tomb. America descended into something best described as Egyptomania. Originally, the Vista was planned to be built in a Spanish style, which you can see reflected in its exterior. But the designers did an about face midway through construction, resulting in a rich and opulent Egyptian interior. To this day, looming golden pharaohs stare down while art deco pyramid lighting fixtures jut from the ceiling.

For a while, it seemed that the pandemic had shuttered the Vista permanently. But the guardian angel of Hollywood cinemas Quentin Tarantino plucked it from the executioner’s block and it’s due to reopen sometime within the next year. It’s anyone’s guess whether it will still offer the legendary $6.50 matinee that made it and its former sister theater the Los Feliz 3 fast favorites.