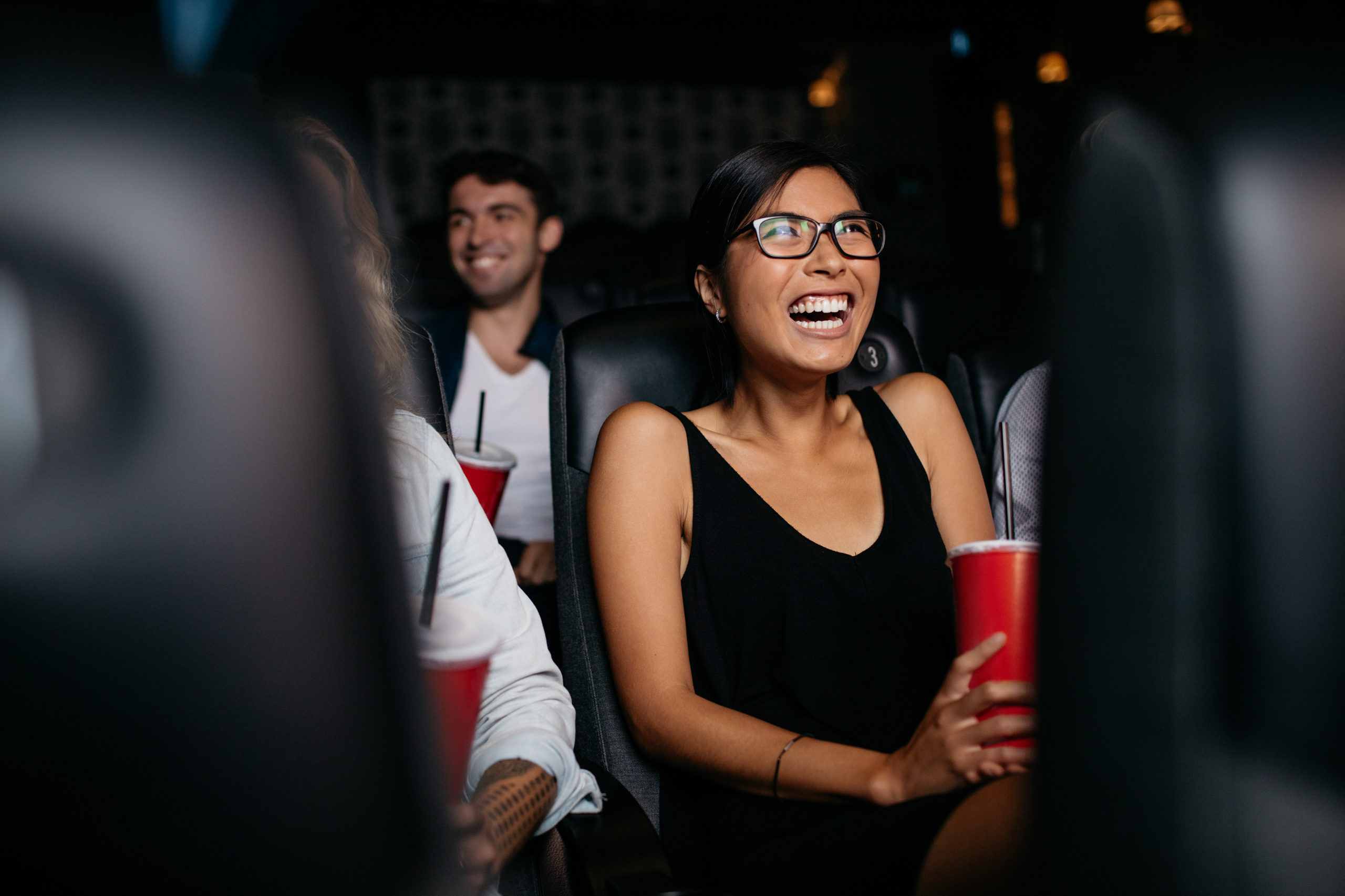 With restrictions lifted locally and all across the nation – now is the time to indulge in the moving-going experience most of us all love and missed. Support your local theater by ordering some freshly made popcorn and enjoy these hot new must-see movies coming out in July 2021. It’s clear the film industry has been hard at work lately and July 2021 is the big payoff month that we’ve all been waiting for. This lineup of summertime movies will surely NOT disappoint. Trust us – you’ll want surround sound for most of these epic blockbuster movies. However, there are some stream-only movie options that made the list as well. Kicking us off is a much-anticipated take on a well-loved classic that’s been in the works for years:

This all-star cast featuring LeBron James, Jim Carrey, Michael B. Jordan, Zendaya, Shonequa Martin-Green, Gabriel Iglesias, Anthony Davis, Kyrie Irving, Klay Thompson, Don Cheadle, and much more promise to breathe new life into Space Jam. With the perfect blend of ace actors and NBA legends, this Warner Bros movie will earn the eyes of movie fans, nostalgic 90s babies, and sports fans across the globe.  As the name promises – a new legacy has been birthed with this new lineup and we hope Space Jam: A New Legacy delivers just as many belly laughs as the original Space Jam film offered up in 1996. The plot will seem familiar as LeBron James teams up with Bugs Bunny and the rest of the Looney Tunes for this well-awaited sequel.

Scarlett Johansson brings action, wit, and sex appeal back to the big screen in this Marvel Series film. If you are caught up on all the Marvel flicks – this one is a must-see taking place between the events of Captain America: Civil War (2016) and Avengers: Infinity War (2018). Furthermore, this film also provides flashbacks touching on the character, Natasha Romanoff’s past. As the title elicits – this July 2021 movie is all about the Black Widow as a character.

The plot will follow along Natasha Romanova (aka Scarlett Johansson) as she is groomed from birth to become the ultimate operative. Then, when the U.S.S.R. breaks up, the government then tries to kill her. From there, the action switches to present-day in New York where she is a freelance operative. Her past seemingly comes back to haunt her in current time. Though the plot may appear somewhat vague from the trailer, we do know that this action-packed film will also be delivering danger, violence, love, laughter, sprinkled humor and resilience – the usual Marvel Studios foolproof formula.

This delightful family-friendly sequel to The Baby Boss (2017) will hit theaters just in time for 4th of July weekend. The Boss Baby: Family Business, also known as “Baby Boss 2”, follows along the same brothers from the first film The Baby Boss as full-grown adults – for the first part of the movie at least. The pair, now estranged, take a magical formula that transforms them into babies for 48 hours. Now stuck together as infants, they must go undercover to stop a devilish genius from carrying out devious acts – all while inspiring a new family business. This fun-loving DreamWorks film is a must-watch for children, and may also attract the likes of adults with a fiercely talented cast offering up their voices. This lineup includes Alec Baldwin, Eva Longoria, Jeff Goldblum, Lisa Kudrow, Jimmy Kimmel, and James Marsden.

Disney offers up this hilarious and adventurous summer flick featuring big-screen favorite Dwayne Johnson (as character Frank Wolff). Paired up with Emily Blunt (playing Dr. Lily Houghton), the two embark on a danger-ridden adventure together in search for an ancient tree that holds healing powers. A discovery that is absolutely vital to the future of medicine. This thrilling movie is a Disneyland goer’s delight as the film is based off of the theme park’s small riverboat attraction. The original, and physical theme park ride, Jungle Cruise, opened in July 1955 at Disneyland Park. So, it’s only fitting that the movie release in July as well, only 66 years later.  For all Disneyland fans, and fantasy/adventure fans this one is a strong must-see movie this summer.

Chris Pratt, the king of action, puts forth another performance that looks like it’s worth watching. A family man (Chris Pratt / Dan Forester) is summoned to join in and fight for mankind, who is losing a global war against a deadly alien species. In order for humanity to survive, Dan Forester, and others, must team up and travel 30-years to the future to defeat the unfamiliar species. Director Chris McKay is known for action, so we are not expecting any disappointments. Known for other fun, fantasy films such as The Lego Batman Movie, The Lego Movie and the Robot Chicken. This July 2021 release movie should be no different and is expected to shine through as a summertime favorite.

6) Trollhunters: Rise of the Titans

Directorial genius Guillermo De La Toro who has given us The Shape of Water, Hellboy, Pan’s Labyrinth, and Crimson Peak now delivers Trollhunters: Rise of the Titans. Known for his Academy Award-winning fantasy films – this one is sure to be a big hit as well, just like the film’s predecessors “Trollhunters: Tales of Arcadia” (3 seasons on Netflix), “3Below: Tales of Arcadia” (2 seasons on Netflix) and “Wizards: Tales of Arcadia” (2019 animated film). Well-liked characters from all three previous DreamWorks Animation pieces will appear in Trollhunters: Rise of the Titans to dazzle us all over again in this captivating family-friendly film.

The plot follows these teamed-up heroes in their fight against the Arcane Order in an effort to gain control over the magic that binds them all. In order to view this fantasy, action, and fun-filled film you must forgo the in-theater experience. This movie is set to premiere exclusively on Netflix on July 21st. If you are not familiar with the characters, we recommend you catch up on all the action on Netflix. Indulge in the two previous series pieces (3Below & Wizards) or, the series latest release – the film Trollhunters: Tales of Arcadia (2019).

The Forever Purge will be the latest in the Purge film series following The Purge (2013), The Purge: Anarchy (2014), The Purge: Election Year (2016), and The First Purge (2018). These horror films are always nothing short of violent and wildly disturbing. If you can stomach it – this Universal Pictures eerie yet action-filled film will be hitting the big screen on July 2nd. The plot follows along a couple that are up against violent outlaws. These criminals do not abide by the rules of the purge.  For those who are not privy to the context of the film series, “the purge” refers to a brief time period once a year where murder becomes legal. In order to help you catch up, we’re providing some links of where you can watch the previous Purge films below:

Yet another film series follow-up movie is set to hit theaters this summer with Escape Room: Tournament of Champions. This psychological horror movie follows the 2019 release of Escape Room by Columbia Pictures. Just like the sequel’s original film, the audience can expect loads of gore, suspense, and jump scares throughout. This summer, Columbia Pictures presents Escape Room: Tournament of Champions premiering July 16th only in theaters. The plot entails six people. To their horror find themselves locked in escape rooms and they must solve a way out in order to survive. While fighting for their lives they slowly begin to uncover what they all have in common. Mark your calendar for mid-July to find out how it all ends. But before you do, make sure you are all caught up on the first film in the series. Available to watch now on Amazon Prime Video.

Another psychological thriller is here to trickle into our nightmares this summer. Old is a thriller movie about a family on vacation on a secluded island. That family quickly makes a horrifying discovery. It becomes apparent that they are not on vacation. They are stranded. They need to get off the island as soon as possible in order to survive. The dangerous island seemingly fast-forwards the aging process, putting them at risk. The longer they stay, the more they lessen the chance of ever leaving.

Watch on July 23rd as they fight the clock. If you are hesitant to give this one a go, note that the director M. Night Shyamalan is no stranger to both producing and directing popular psychological thrillers. He is responsible for movie masterpieces such as Split, Glass, Signs, The Sixth Sense, and Lady in the Water. This seasoned veteran in horrifying movies is sure to deliver yet another unforgettable film with Old.

Acting legend Michael Caine stars in this witty British Crime drama that serves as a modern-day take on Charles Dickens’ novel “Oliver Twist”. A gang of young hustlers, including Oliver, plan the heist of a century. Will it turn out to plan? Find out July 30th in select theaters.

That concludes our list of must-see movies coming out this July. This summer, movie theaters are calling our names. Grab a friend, family member, or lover and hit the movies. Prepare for a whirlwind of entertainment. If you happen to choose any of the movies listed above – let us know how they panned out! Head to our Facebook Page to give us any feedback you have. Happy viewing!

Anything that ISN’T Disney.