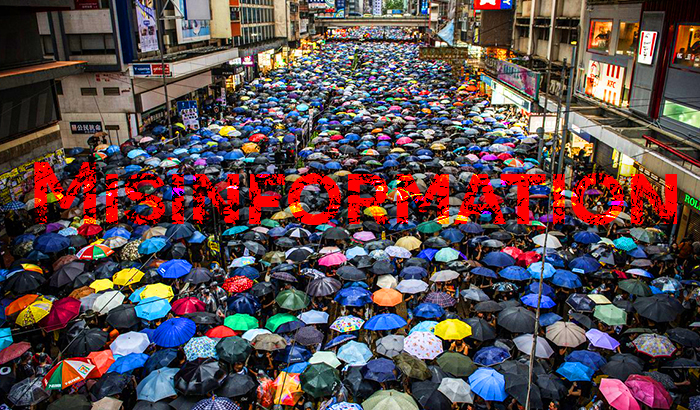 In the past 20 years technology has advanced so rapidly that measures to control and validate the information being disseminated simply has not been able to keep up.  There are blatant examples of this when it comes to hate-mongering from Alt-Right groups, and of course most famously with the allegations that President Trump used social media to scare votes in his direction with “fake news.”  While we’d all love to believe that the worst is behind us, the reality is that there is still a huge problem.

This past week we saw huge transgressions in the form of fake news being spread by one of the largest governments in the world:  China.  For those who are not up to speed on what is happening in Hong Kong here is what you need to know:

How is this related to misinformation?  Well, while you have undoubtedly heard of the Great Wall you may not have heard of the Great Fire Wall.  The Great Fire Wall is, in addition to being an amazing pun, the term coined for how China manages to keep information out.  I witnessed this personally while living there back in 2008, if you searched for anything controversial it just wouldn’t come up with any results.  For example, there was an earthquake in the south of China and a fair amount of people died, yet I couldn’t find it anywhere on the internet.  I also witnessed this in 2017 when I was in Shanghai speaking on behalf of JohnHart at an investors summit and couldn’t access Facebook at all – this I remember very vividly as I needed to launch an ad campaign for some of our agents and ultimately had to remote into a computer in Europe and then from there remote into my computer in Los Angeles.  I’ve never felt more like a matrix-esque hacker in my life, but I digress.

The latest transgression has been controlling the information surrounding the protests.  Since mainland exists behind the Great Fire Wall they have no idea why the protests are occurring, and rather than sharing the facts China is now spreading nationalistic propaganda and anti-western sentiment.  What’s making matters worse is that Hong Kong’s Chief Executive Carrie Lam is basically silent about the whole situation and just letting the police sort things out.  There could be myriad reasons for why she is adopting this strategy, but the only one that comes to mind is that this isn’t her idea and she really doesn’t believe in the bill.

Obviously, intervention would mean war, and I wouldn’t advocate that over this, but where do we draw the line?  Isn’t information a basic human right?  It truly is a shame to see this still happening, on this level, in 2019 – personally I think the constriction, control, and obfuscation of information to mainland China is just as bad if not worse than the extradition bill in Hong Kong!

Why does this matter to you and why is a real estate company covering this story?

In 2014 China surpassed Canada as the largest share of foreign buyers of US residential property, and they have been maintained that position ever since.  In 2018 China accounted for 25% of all foreign investment in US residential real estate.  Of that 25%, 40% of the investments have been made in California – no surprises as “we the best” (in DJ Khaled voice).  The west coast being the best coast notwithstanding, we face the largest risk in terms of a pull back.  We have already seen a pull back begin in the education and tourism sectors, worth $13 billion and $35 billion annually respectively, as Beijing has officially warned it’s citizens to reconsider whether the United States is a hospitable environment.

As for the housing market we have seen a year over year decrease of 36% in foreign investments in US property, and many believe that is a direct result of anti-Chinese rhetoric from D.C., anti-western sentiment propagated from Beijing, tighter capital controls in mainland China, difficulties obtaining visas to the US, and of course the tariffs imposed from the trade war.

I don’t see this triggering any sort of action in the housing market as foreign investment still only makes up a relatively small portion of the overall market, but we all need to be cautious because our governments are playing with fire.  I’ve always said there wouldn’t be another world war between super powers because our economies are too intertwined, but when the money stops flowing the bullets start flying.

If you’re interested in learning more about the HK Protest or the Great Fire Wall check out the videos below!

Video on the HK Protests

Video on the Great Fire Wall