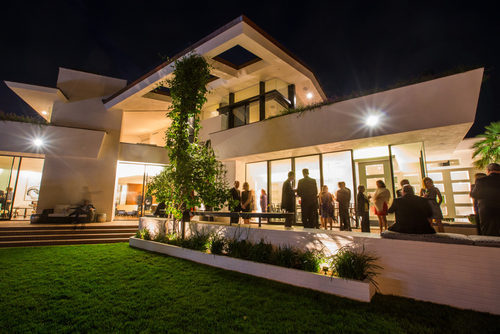 Today I wanted to go for a light and entertaining read – so I thought, what better way to accomplish that than to write about two entertainers and their recent blog-worthy real estate feats. I’ll start with television host, comedian, and actress Ellen Degeneres.  No stranger to buying and selling real estate, Ellen just recently purchased what many deem ‘the best house in LA’.  The Brody house—yes, this house is so awesome it was given a name— boasts 13,511 square feet and sits on 2.3 acres of L.A.’s finest land.  Being the entertainer that she is, I’m sure the 6 bedrooms and 9 ½ bathrooms inside The Brody House won’t go unused (unlike many other rooms in the neighboring mansions around Holmby Hills).  With a knack for modern architecture and design, it is very suiting for Ellen to purchase what is considered the most iconic and modern estate in L.A. The Brody house was designed in 1949, and stood true to its original layout until this last October when designer Stephen Stone brought it back up to date—and oh boy did he do a spectacular job.  Real estate sources show that Ellen paid $39,888,000 for the property before it even had a chance to hit the market!  I wonder if Ellen will have a problem with her new neighbor, Mr. Hugh Hefner, who I hear enjoys throwing large parties quite frequently–I’m sure she won’t mind, I wouldn’t.  So, take a peek at this contemporary masterpiece, it lives up to the hype.

Now we’ll take a step out of Los Angeles and head over to South Florida where we’ll find Michael Jordan’s mega-mansion compound that was just recently finished.  After two years of waiting, MJ and his soon to be wife Yvette Prieto are finally moving into his gigantic new South Florida palace.  The property sits inside Golf legend Jack Nicklaus’s super exclusive The Bear’s Club community, in which the initiation fee by itself is supposedly $350,000 (not counting the monthly dues). According to realtor Jeff Lichtenstein, a luxury real estate specialist in Florida, Air Jordan spent $4,800,000 for the enormous 3 acre piece of land and paid $7,600,000 on construction alone.  Inside, the couple enjoys 11 bedrooms—though I doubt they will step foot in all of them—a media room to re watch highlights of MJ’s slam dunks over and over again, and an athletic wing with a basketball court for MJ to try and relive those slam dunks over and over again.  The two story guard house assures Michael and Yvette won’t be bothered, even though I’m sure it’s hard enough to get into that gated community as it is, let alone the Jordan estate ( a one story guard house would  have done just fine).

Two questions loom after its all been said and done—one, why didn’t MJ choose a waterfront property for his new home?  This is Florida we are talking about, the land where sunglasses fog up upon stepping outside from an air conditioned room!  It just makes sense to live on the water when you have an unlimited budget.  The second question is how much will he be able to resell the property for?  Realtor Carey Lichenstein wrote, “It would be interesting to see what the Jordan home sells for, being that its location, while great for MJ’s privacy, is not ideal for resale to the trophy and yacht buyer”. While I respect the breathtaking size and stature of MJ’s dream-team compound, if I had to choose between his new crib and Ellen’s, I’m kicking Ellen out and moving in tomorrow.  When it comes to many areas of life, less is more, and although neither one of these estates can be characterized as “less”, I would prefer to be able to find my roommates without having to use some sort of GPS locator…

I re-migrated to Palm Beach after living in Tuscany for five years; I naturally missed the scenery of the Tuscan Hills, the picturesque beauty and old world feel. My sister recommended Authentic Provence and mentioned their European garden antiques and unique French and Italian Décor that added that touch of elegance to her estate. I hastily visited their showroom and The Secret Garden, an outdoor showroom and was in awe of all the authentic garden antiques, European planters, Antique Garden Fountains, Outdoor Furniture, Wellheads and Gazebos that Authentic Provence had to offer, it was definitely life changing for me, as these finds are so rare in the US. Now when I have that longing for my Tuscan life I simply venture into my garden and I’m immediately transported to Tuscany. Visit them online and be inspired by a world that is exquisitely divine.

Oh my god, he bought the property for almost $40 million dollar? How rich he is! Well, welcome to celebrity lifestyles: luxurious, glamorous and fantastic. The property is equipped with a number of facilities that I’m sure everyday he will be like a king.

What a property he have, Awesome! Really he is living the life King size. I also love the luxury bus which he owns. Dream to have chance to live his life for single day. LOl.

I think Megan made a really great point about white wrrties being timid about writing multicultural characters. I was at the NESCBWI conference this weekend and there were a few jokes at keynotes about how few men were in attendance versus about 99% woman. If this is at all reflective of kidlit wrrties in general, which I believe it is, there would be no books about male characters, since we are all women! Obviously that is not the case. However, as a white woman, I find it far less intimidating to write about another gender than another race, primarily for fear of getting some small detail wrong that would accidentally offend someone. While I found the post about Tikki Tikke Tembo really great, the examples given in supporting why that book is unintentionally racist, are exactly the things that I think would scare off some wrrties contemplating a multicultural character. It’s the tiniest details, like the shoe example in the Tikki Tikki illustrations, that would be so scary to get wrong. I would love to see this topic presented at a conference, because we can only affect change from within the industry. It would be a fascinating panel to have a mix of multicultural wrrties and white wrrties discussing the issue from both sides. I think a lot of white wrrties almost need to get “permission” from others in different cultures to portray them! Love this site- thanks for such great topics!