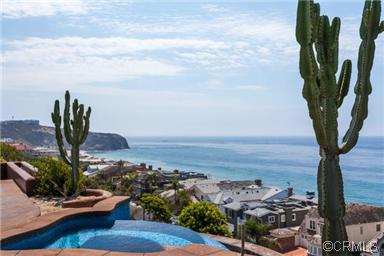 With the Los Angeles Lakers at a low point in franchise history,
this Lakers Exec turns to real estate for a win.

Monarch Bay, nestled in the Niguel Shores, is known for its breathtaking scenery composed of private and pristine beaches.  Buss’s home consists of four bedrooms, four full baths, four half baths, and two fireplaces.  A landscape consisting of cacti scattered across the property, deep red stone and hardwood finishes, as well as brick lined accents ring true to the Santa Fe inspired theme.

The 3,808 square foot floor plan features a gourmet kitchen, living area with telescoping doors, and countless custom built-in options.  The backside of the property delivers a lengthy deck area including a hot tub and beautiful panoramic ocean views.  The front of the house offer more privacy, and rightfully so as it is where the swimming pool is located.

Soon after the Dana Point “desert oasis” was listed, Buss went on a spending frenzy purchasing five properties across Southern California costing a total of $13.53 million!  Four of the five properties can be found adjacent to one another at the Strand at Headlands – a swanky community perched atop Dana Point.  Buss ended his shopping spree with the acquisition of a Downtown LA penthouse, decked out in Laker Purple, in the nosebleed section of the Ritz Carlton (a tad bit nicer than the nosebleed section at Dodger Stadium).  Though many of us are hoping for a lucky Lakers lottery pick in next year’s NBA draft, either way, Jim Buss has positioned himself well (off the court) for the coming seasons.