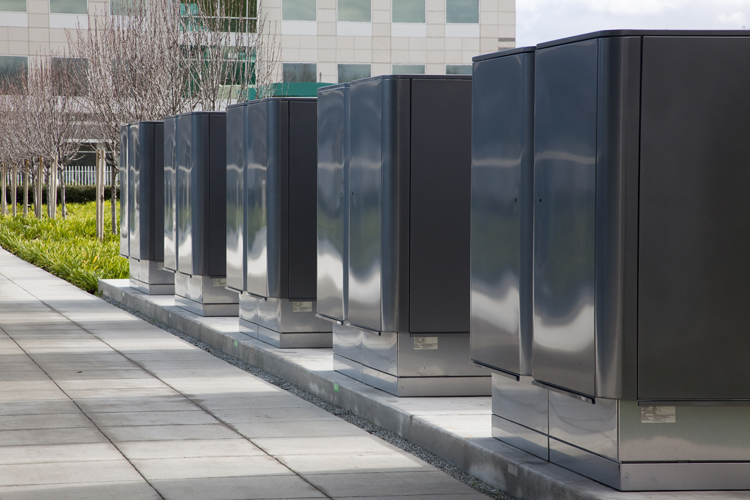 Can this alternative energy upstart truly offer an alternative source of energy for Southern California homeowners?

We’ve all seen it before in the past where a short but sweet aggregation of letters and numbers changes the reality of the world we live in (E=MC2) ring a bell?  To most of us these cryptic formulas are like a foreign language but affect us all no matter what language you speak.  The year 2012 may be the year of another world changing discovery that can be summarized simply as (CH4 + 202 à CO2 + 2H2O + e– + Heat).

Featured in a 60 Minutes spot two years ago this month after a lengthy stealth R&D period, Bloomenergy has steadily added to its list of customers some of which you may know (Walmart, Bank of America, Coca-Cola, Ebay, Google, FedEx and Adobe) just to name a few.  The commercially available product “Bloomenergy Server” has been providing clean and efficient power for these giants for the past two years while they iron out production kinks.  This year many believe that the same folks that brought us Google & Amazon will now launch Bloomenergy into the public eye as an IPO.  This means that funding for a commercially available “Residential Energy Server” may soon hit the market. Fuel Cell technology is nothing new, originally developed by NASA scientist years ago to provide oxygen and power for missions to the average business multi-conglomerate or residential homeowner.  KR Sridhar (a NASA Rocket Scientist), has recently turned this idea on its head and created a cheap and cost effective fuel cell that might someday change our world.  Bloomenergy’s new technology uses cheap materials such as ordinary beach sand instead of expensive “Rare-Earth Metals” to generate a high electrical output that is much more efficient than legacy technologies and without combustion.  The technology is based on a chemical reaction that occurs when a mixture of gas and air is passed through one of Bloomenergy’s fuel cell.  Each fuel cell is about the size of a Polaroid in size and thickness and can generate enough electricity to power a light bulb.  Connect a number of these fuel cells together to form a fuel stack which is roughly the size of a loaf of bread will power the average America home.  Now that’s truly the best invention since sliced bread! Mars has been out of reach for

This is truly a game-changer and the implications of this invention will be astonishing.  Just as the mobile phone revolution has removed all pay-phones off the street and transformed the every-day lifestyle of just about every human on the planet so will Bloomenergy.  This technology has the potential to affect that age old saying in real estate “It’s all about Location, Location, Location”.  Businesses will be able to setup shop anywhere and not worry about the delivery of cheap power since they can just install a Bloom Energy Server on their front lawn or city basement.  Under-valued real estate located near power lines, nuclear power plants or coal burning plants will be a thing of the past.  These legacy power generation and delivery systems will soon be relics of the past only to be found in 6th grade history books.  Maybe someday soon we might see a revival of 80’s pop-culture; instead of carrying boom-boxes around with us we might soon carry mini Bloom-boxes around with us!

I hope this day comes soon! The power companies have had a monopoly long enough.

Bloom boxes are not portable. They require a form of hydrocarbon energy – natural gas for example, in order to function – I don’t think you’ll want to carry around a propane tank with your “bread box”. Also, that last item in the formula is “heat” and they put out lots of it – 500+ degrees!

On the (very big) plus side – Bloom boxes generate electricity much more efficiently than the oil or coal burning power plants the electric companies use AND you don’t have to pay to make up for the lost electricity due to an inefficient distribution system. They use your provided hydrocarbons (CH4) and oxygen in the atmosphere and create carbon dioxide, heat, water (steam) and electricity. It is extremely clean burning – and virtually silent.

The US in particular has enough natural gas to last hundreds, if not thousands of years at current burn rates.

I predict that when a home unit is developed, owners still keep their connection to the power grid. They will significantly increase their purchase of natural gas, but lower their overall electric+gas bill and even be able to sell unused electricity back to the power company. This is best of both worlds – if the local power grid is down they will still generate electricity from their natural gas. If the natural gas is off, owners will still be able to cook and heat their home via electricity from the grid. In emergencies, a backup tank of propane turns the Bloom box into an emergency generator.